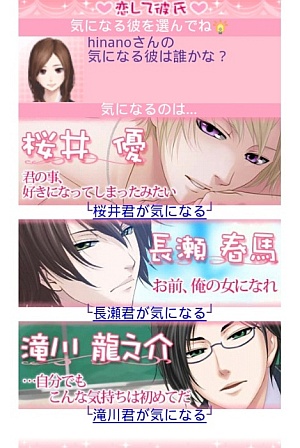 Well that hospital game was starting to get on my nerves with all its stupid glitches (I mean seriously if I had paid money for this I’d want a refund!) so I decided to try a different game called Koishite Kareshi. The game is pretty simple: you have 3 guys and you can pick one to be your “boyfriend” and from there on you can do various scenarios and events with him. The game is constantly being updated to reflect seasonal stuff so right now they have a Halloween event going on (although I’m probably going to miss it since I only started this game today ;_;.) I decided to pick Megane-kun cause he has a cool name Ryuugawa Ryuunosuke ww.

END_OF_DOCUMENT_TOKEN_TO_BE_REPLACED 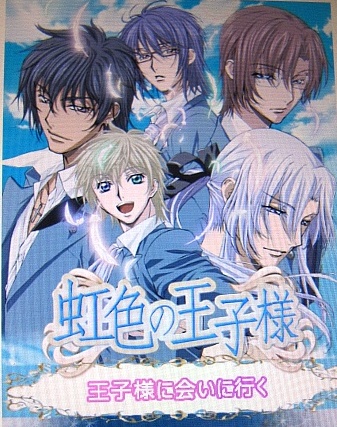 So I figured since these mobile games are ongoing (and have stupid daily limits of how much you can see) they’re gonna take me too long to write a review for so instead I’m doing a PREVIEW! I stumbled upon Mobage which I thought was restricted to Japanese cell phones only but it looks like they have an unrestricted version for android phones running Android 2.1 or higher. You do not need to register a yahoo japan account as long as you download the app (you need to allow for non market apps to download to your phone) from sp.mbga.jp. Once you launch the app you can just register via app and you will be able to access all their games (well at least the ones available for smart phones – not Japanese feature phones.) Most games are web based so that’s why phones running 2.1 and higher will have flash on them to be able to run them. Some are app based which will require you to download the app to your phone and run it simultaneously with the site.

END_OF_DOCUMENT_TOKEN_TO_BE_REPLACED

So I left HNK2 for last because I feel like it’s the bastard child of the whole series. The only thing it has going for it is Kazuki Yone is still the artist for it but the characters are different, the seiyuus are different, and the entire Tamayorihime story is twisted in such a weird way that I wonder what they were thinking then they made it. Well they realized the ORIGINAL was a massive failure so actually this is in fact a remake of the Hisui no Shizuku (hence the 真) because apparently they remade all the chars personalities and for some reason kicked off the HNK1 cast off the face of the earth. I’m not about to extend my hiiro marathon and play the original for comparison so you’ll just have to satisfy yourselves with the remake review XD. So this time we have a good girl Suzu (similar to Saya from HNK4). Her mother is the Tamayorihime but she says soon the Ryujin (Dragon God) seal will break and Suzu will be the next in line for the Tamayorihime duties. One rainy night the seal does break and her mother Ayako indeed goes to seal it, sacrificing her life in the process. On top of this, the spirit of the Toyotamahime, who just so happens to be the older sister of the original Tamayorihime (that we never knew) escapes and possesses Suzu’s older sister Mao. So now the village has a half broken seal with demons running around everywhere and Suzu’s gotta train to seal it up. If that wasn’t bad enough, Toyotamahime-Mao comes and tells Suzu that she hated Tamayorihime (Marsha Marsha Marsha!) and wants her to die while fully breaking the seal so she can get the rest of her powers back. Suzu’s like “k sure I’ll die as long as my mans are alive” but Suzu’s childhood friend and guardian Akira won’t be havin’ any of that. Additionally, in HNK2, the guardians are humans and are not gods with inner animal powers. They fight with weapons which they are able to pull out of thin air (lol) if their bond with Suzu is strong enough thanks to the Magatama powers. This also means that if the bond weakens, they will be completely useless bums so Suzu’s got a lot on her plate. With the help of her loli neko guardians Sana & Kana, and manharem (+1 sarcastic token bff chick) she’s got to get her sister back to normal and save Japan! END_OF_DOCUMENT_TOKEN_TO_BE_REPLACED

And so this is the fandisk to Hiiro no Kakera 4. This features 3 scenarios for each guardian with additional routes for the Suwa brothers and takes place after the ending of the last game.