Cooking otome game double feature starting with Festa Regalo! So one day Felicita’s dad got bored and decided that he’s gonna make his mafia mans have an iron chef battle. The prize is having his powers for 1 day and whether they like it or not, they must participate. It’s up to you and your chosen dude to run around, gather ingredients and make awesome dishes to please the judges. As a reward though, there are some short bonus scenarios & CGs.

So I actually started tinkering with this game on the flight from Japan and had no guide but I managed to figure most of it out on my own. Here are my tips for the game:

So there aren’t really any deep plots in the game it’s kinda like UtaPri music where you do stuff -> get small scenario as reward so I guess I’ll just do a basic scenario run down?

Liberta – Liberta’s looking for the illusionary hot pepper but turns out Dante was hogging all of them in his house. Using that pepper he wins the final duello and aside from being Papa for a day, he asks to spend his day with Feli. ♡ In the omake scene he and Feli eat some pizza together and then she falls asleep on his shoulder while he blushes and babbles randomly not knowing whether or not he should put his arms around her. Liberta’s scenes were cute but as always I’m not sure if the game’s trying to be all pure with him because of the incest thing or cause they want to turn him into Naruto like 4chan likes to call him (they did make a ninja joke in the game to which I was like :shock:).

Nova – In Nova’s, they’re looking for the illusionary chestnut to make some monte blanc pastry. After winning, they ichaicha as Felicita spoon feeds him and all the guys spy on them until they get caught and fall through the door. Nova gets pissed and as Papa for a day forces them all to patrol the island from dusk till dawn. In the omake cgs, Felicita spoon feeds Nova some cake and asks him to do the same back. In the 2nd one, they go patrolling and are caught in a crowd. Due to Nova’s face being a boob magnet, he falls head first into Felicita’s rack but is happy she isn’t mad afterwards and acknowledges it as an accident. (But he prolly liked it ror.) Guess it’ll be hard for him to implant himself into boobs once he grows up & gets taller in AF2.

Debito – In Debito’s they’re looking for the illusional egg which is apparently produced from Dante’s love-chicken. Eventually they get it from Liberta and make a dessert and Debito wins papa’s seat for a day. His request is to spend some special one on one time with Felicita and give her the treasurer role. In his omake, they drink together at the bar and then she comes into his room where he ぺろぺろs her on his bed (/▽*＼)～♪ ｲﾔｧﾝ. Thank you Debito for not letting me down this time around ;D. 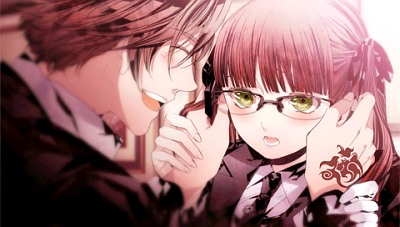 Pace – For Pace they look for the illusionary mushroom to make the lasagna for the competition. Pace’s route was strangely the first one where I had lost the duello multiple times in a row and had to keep rebooting my game and loading my save ^^;. Anyway after they win Pace’s papa for a day thing is to go around the island eating food with Felicita. In the CG omakes Felicita finds him passed out from eating too much  at a bar. He babbles how he loves food but he also loves Felicita. In the 2nd omake Pace says he’s blind without his glasses and can’t see Felicita’s face if he takes them off. He then takes them off and puts them on her face making her probably nauseous since people who have good vision get sick from looking through glasses (I know I do!) 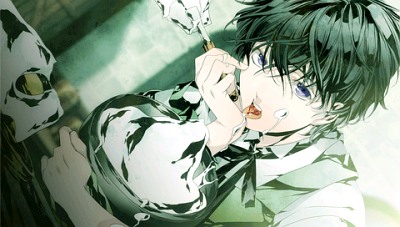 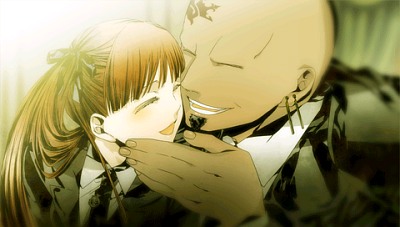 Dante – In Dante’s they’re looking for some legendary fish for their contest entry. They find it because of Jolly’s rabid mass of octopi. After Dante wins his decision is to advertise the iron chef contest in a popular Regalor magazine and then everyone else rages that they should instead do a special on Lasagna, cats, Felicita, masks etc. In the omake Cgs, one is of Dante drinking a beer on his sheep and the 2nd one is of Felicita whispering in his ear that she loves him and him blushing like a pedobear. Wow like really Dante gets a cute romantic cuddling CG with Felicita but all Luca gets is hair brushing and Pace gets to stick his glasses on her face. Who the hell made the decisions for these things??? I’d rather see Felicita with someone who isn’t twice her age acting all cute! （ಠ_ಠ） 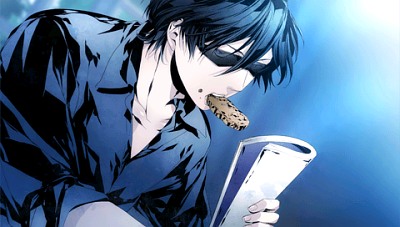 Jolly – As I predicted right off the bat, Jolly’s looking for the illusionary octopus. Since he gets sea sick he tries to get other people to find it for him instead. After they find it and win the contest, Jolly’s like “oh idgaf about being Papa for a day I’d rather be in my lab like a hermit.” Since Felicita complains, he lets her do whatever she wants and she throws a party for her parents. Jolly can’t end the game without at least 1 troll and he puts a special spice in everyone’s food causing them to make animal noises at the end of their sentences. ＼(^o^)／ In the CG omake 1, Felicita brings Jolly some crunchy bread to munch on while he’s working. In omake 2 he returns to his pedobear ways and grabs Felicita in raep mode scaring her and making her run off crying. ( ´_ゝ｀)

Ash – As expected with Ash, they look for the illusionary apple. After winning the contest,  Ash says he’s not interested in being papa for a day and neither is Felicita. Mondo complains that he wants to spend time with Feli like the oyabaka he is but Felicita rages and runs off with Ash instead. In Omake 1 Felicita finds Ash pigging out on some meat though being a tsundere and saying it’s not as good as apples. In omake 2, Ash gets sick so Felicita visits him and sticks her forehead on to his to feel for the temperature…which probably rises while she’s like on to of him. ＜●＞＜●＞ huhu. Baww Ash was so cute…(also he totally grabbed her boob in one of the non CG omakes where he started talking like a cat thanks to Jolly’s stupid medicine again. xDDD)

Other – Once you completed all the characters there’s a slew of omakes with the “family”. First one is of Felicita being pampered and dressed up in a maid outfit to be a maid for a day to satisfy Luca’s fetishes. Second one is Nova’s crew making fun of him for thinking the letter he received from Liberta was a love letter. Third one is Debito and his dudes at the casino and 4th one is Pace pigging out with his mans at the restaurant as usual. Fifth one is Liberta and Dante at a bar where Liberta somehow gets drunk off grape juice. Sixth one is a flashback to when Mondo was playing with shota Luca and Jolly was like Luca let’s go but Mondo wanted to cuddle his “new grandson” a bit longer lol. The 7th and 8th omakes made me explode because they were Arcana Famiglia school life crossovers xDDD Felicita is the new transfer student and she transfers into the same class as Nova, Liberta & Ash. Meanwhile the other guys are teachers with Dante yelling at Jolly to stop slacking off and telling Debito, Luca & Pace to be quiter while walking through the hallways 8D. OMG MAN IF THEY MADE THIS INTO AN INDIVIDUAL GAME I’D BUY THE LIMITED EDITION. MAKE IT HAPPEN HUNEX & COMFORT SOFT.

I actually enjoyed this game a lot. The chibis were really cute and the cooking part really interactive. At first it felt like a drag gathering all the items but the longer you play, the more recipes and items you will have so you will have to do less ingredient hunting! The comedy in the short scenarios was really great and even Jolly’s and Dante’s routes were decent enough that I didn’t skip over them like I did with the last game. The family omakes were a A LOT of fun and that’s why if you do play this game, play EVERY character because it’s worth it (´＾ω＾｀). If you’re a completionist this game might drive you a bit crazy. I only gathered 131 recipes out of…300 lol and I didn’t even complete half of the mini-scenarios for all the characters. So yea depending on how much you want to see/complete this game can be as short or as long as you like it. As far as otome/romance….not so much? This game’s focus is mostly on cute & humorous stuff so don’t come in expecting any action….except maybe in Debito and Ash’s omakes ;D. I’ll be posting a review of Isshoni Gohan soon as well since I was playing it at the same time as this game, though unfortunately, this was the better cooking game. Looking forward to Arcana Famiglia 2! ＼( ^o^)／