Well it’s my last B’s Log issue but since I do have access to scans I may still continue doing these posts. They will be mostly text/news bit related than image heavy though I guess? Not sure if anyone’s interested in that since news spreads pretty quickly but let me know if guys are interested.

This month’s big tokuten is this  UtaPri tote bag. It’s tacky as fuck and I have no idea what I could put into it or where I could even bring it, but it does have a nice little inner pocket for like a phone or something lol. Oh well I’ll keep it in my bag box maybe   It could come in handy one day for something.

Kinda pissed that this is my last issue of B’s log because apparently for the next 4 months they’re gonna have these Alice inserts in their issues. I woulda rather had that than stupid ass Hana-Awase pamphlets. THEY ARE SO GROSS UGH:

DO NOT WANT BRO. Is anyone even going to play this game? Everything about it grosses me out including the art. I have no idea how it could be from the team that brought me Love Revo & Real Rode.

There’s also this dousei kareshi poster which is hilarious becuase on the other side are the 3 main guys all in WHITE while this side above is the GUYS YOU CHEAT WITH all in BLACK! lmfao

I read the Diabolik Lovers vs character interviews with Subaru & LAITO (apparently it’s not Light or Raito its LAITO hahaha lol wut.) Some random facts: Laito’s erogenous zone is below his belly button and he also gets turned on from Subaru’s jealousy :lol:. If he switched bodies with Subaru for a day, he’d go screw bitch-chan and take pics to show him later. おまわりさんｗｗ Subaru’s interview was quite brief and he told us to stop asking dumb questions or he’d kill us. Lol, the Vs CD comes out this week, I’m very much interested in hearing how it will turn out lmao. I think Laito just wants to 3P it up with Subaru & Yui xDDD

In case you’ve been under a rock, Amnesia anime will be airing Spring 2013. Is it me or does Toma look hotter in the anime than the game?? Also Brains Base is doing it so THANK GOD NO DEEN. It may actually turn out to be a decent adaptation for once. 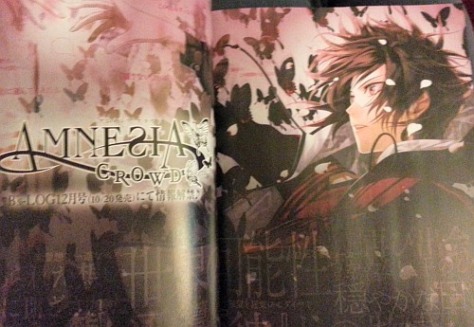 Amnesia CROWD will be the name of the next Amnesia game slated for next year. They better give me a real Waka route this time.

I was actually wary of the Yone poser for the new hakuoki yuugiroku game but as you can see it’s not THAT terrible. In fact it’s kinda cute! I’m actually kinda looking fwd to this now. Let’s hope Otomate doesn’t delay it another 20 times.

The next Vitamin game has been announced: Vitamin R. The game will feature a completely new character/cast set and it’s basically about you, a teacher trying to turn around a bunch of tone deaf flunky musicians to play like pros. I expect there to be a lot of horrid violin scratching noises 😆

Just a screencap from   Kamigami no Asobi. This game’s progressing at a crawl lmao.

Koei x Tecmo’s new game. Since Tecmo is involved, that means they’ll actually do more than just stare closely at each other like constipated frogs while keeping a 1 foot distance.

One of Otomate’s announced games at Otomate party. It looks different than their usual artist and I’m totally down with that BUT:

WHAT IS IT WITH THOSE TINY FEET. THE DUDE LOOKS LIKE ONE OF DEM CHINESE CONCUBINES THAT WAS FORCED TO HAVE HER FEET BOUND SO SHE COULDN’T WALK. It’s not just this guy either. All of them look like their feet could snap at any moment. I mean the good news, we won’t be seeing their feet most of the time during the game but still what the hell 😆

Sangoku Rensenki has now been ported to VITA. Though really the only difference between that and the recent PSP port is now you can TOUCH the choices or touch the screen to proceed with the text. That’s it. Yea. Well if you have a vita and you haven’t bought the port for sangoku rensenki, then the Vita one might be worth holding out for. Otherwise pass.

PlanPeace, the makers of the Love Revo PC version, are releasing a new game after god knows how many years – Solomon’s Ring. I see lots of elf men. Is this like some lord of the rings spinoff lmao. I Didn’t bother reading the story but maybe I will later >_>. 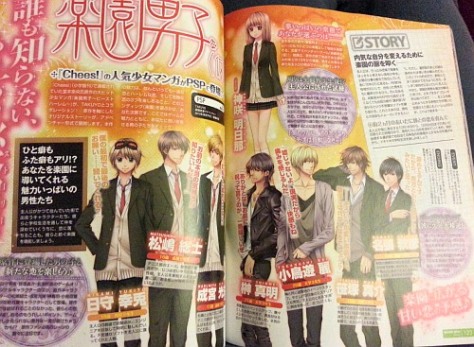 Takuyo’s new game, Rakuen Danshi is based on a manga in Chees! Comic. I coulda sworn they had this game in the works since 4 years ago or something but I’m glad there’s finally progress. The art reminds me of their other games (like Hoshiiro) so hopefully that means no more crap like KamiKoi ugh.

HatsuKare, by the same artist as Isshoni Gohan. Since Otomate isn’t doing it, hopefully it won’t be delayed. Just looks like your typical school romance with a pretty decent voice cast. It’s being done by Furyu who did Aoiza.

Otomate’s game Norn9. The only thing that stands out about this game is it has 3 heroines. This could be good or bad. I remember in DareUra the idea of 2 povs of 2 heroines was good but then you had 1 who had a decent story while the other one was treated like utter shit.  Hopefully they know what they’re doing with this whole system.

Yea I have nothing for Diamond alice this time because all the CGs are actually from previous issues or on the website now lol. I found this comic funny though, Peter claims he’s sacrificed his voice like the little mermaid so Alice told him to turn into bubbles. More than that though, this pretty much confirms that Peter will NOT be voiced in the game which is why he has no voice listed on the site. Very sad indeed. 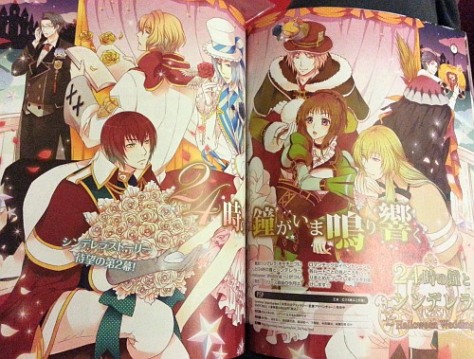 Yay Cinderella! Still waiting for my copy to fly in this week. Why hasn’t anyone posted a walk through yet gdi lol.

Hyakki!! Nothing really new here either, just a few more CGs but most of them are already on the site as well. 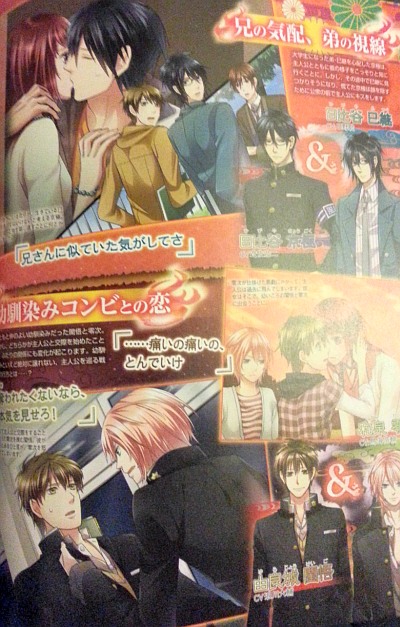 Tasogaretoki mentions there will be rival scenarios. I hope that also = 3P ends lol. Σ(ﾟ∀´(┗┐ヽ(･∀･ )ﾉ 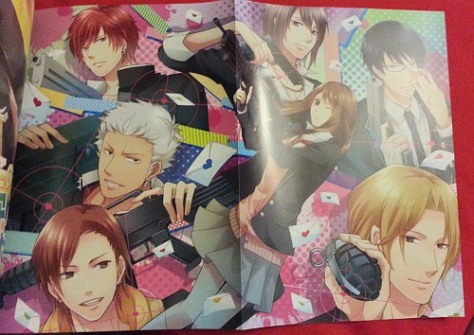 I got a school wars poster to hang up on my  ever expanding otome game poster wall lol.

Kinda sad coverage of Arabians Doubt this time around. I didn’t like Stuart pulling Aileen’s hair like a jealous little turd that he is. I hope in the scene that follows Aileen kicks him in the head.

More Confidential Money. I really want to play this game lmao Otomate stop delaying it. I want to see your vision of my city!! XD

Hell’s about to freeze over cause Ozmafia finally has a release date after like 2 years of being in limbo or something. Though tbh I kinda lost interest ／(^o^)＼ﾅﾝﾃｺｯﾀｲ.

Did I mention that Otomate delayed Glass Fart Princess last issue? Cause they did. 😆 So we got like a traitor, a phantom thief, a vampire and an android alien.  Sounds like happy fun times.

The final installment of the TYB FD series coming out this week as well. Hammer looks hot. I’m sure he has a happy ugu room of love prepared for Chihiro. Lucy looks randy as ever ww.

Ok this made me laugh. I mean I thought the Yanderes in Yandere Heaven are supposed to overpower the heroine and go batshit not like blush and wear an apron HAHAHA. Now I’m actually curious about this game. Maybe if I walk in expecting rape – o – rama and then get this kind of scenario, it will actually be funny.

I just took a photo of this cause I thought it was funny that Toriumi’s wearing a tshirt that says “La De Fucking Da!!” lolol

This month’s ranking, looks the same as always except it looks like we have a NEW entrant at number 10! Wait that #10 is a do not want lmao. Also Toma moved up wtf =_=;. Though the good news is Diamond Alice is the game in 3rd place that everyone’s most looking fwd to.

Meh that’s it lol. I really don’t see a reason to bother buying a subscription anymore. A lot of announcements get spread like a wildfire the day before the magazine is even out and since it takes me a week to receive my copy by the time I get it I feel like I’m regurgitating old news. I’ll see about maybe posting the news stuff like I mentioned at the beginning but not sure if anyone cares since stuff spreads pretty fast nowdays. Oh well hope you enjoyed my posts up to now!