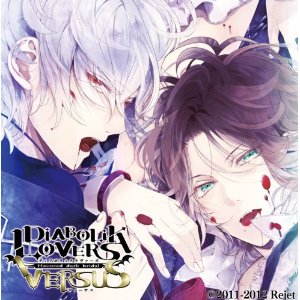 Yea I know it’s actually LAITO not Raito or Light according to the official site lmao. Reminds me of Elick from Riddle Garden but I keep calling him Laito for the lulz. Up until now I’ve only listened to the original do-S CDs of Subaru and Laito in fact so when I heard they were in a versus I was like yippie characters I care about! (And I say “care” in big fat quotations.)  I listened to part of Shuu’s but I gave up cause for some reason non-existant Yui annoyed me lmao. Spoilers below the cut.

So pretty much this.

So yea there I just pretty much summarized the CD. Some of the stuff Laito says is really REALLY disturbing but since it’s Hirakawa in his creeper voice I somehow find the entire thing hilarious (≖ლ≖๑ )ﾌﾟｯ.

Subaru, I love it when you are jealous. Seeing bitch-chan get it on with another guy TURNS ME ON SO BADLY.

Based on what I read/heard my current ranking is Subaru > Laito > Reiji = Shuu >>>> Ayato >>>>>>>>>>>>>>>>>>>>> Kanato. Yea I hate whiny bitchy shotas and I hate hearing Kaji Yuuki screaming. I’m still leaning towards the idea that Otomate is gonna water down the whole thing anyway. Most of their regular games are like implied kissing and hand holding so I can’t imagine them having a scene where idk….Yui is unconscious and Laito implied-rapes her.  Two weeks until the game is released (hopefully no more delays) so  we’ll  have to wait and see what happens then :lol:.

Edit: Someone uploaded one of the tracks to soundcloud so feel free to listen and be sure to have your headphones on!