Well because Con Ed thought it was cool to drill below my apartment window I ended up getting up to check the updates. Since the official site isn’t loading for me I decided to go and explore in game as well as read the official patch notes. Servers have been adjusted as per above screenshot. Black Papel has Free 1-2-3, while Tiki is now the official Rookie server with a 50% exp bonus. I really hope that they added a system to Tiki where the max anyone gets from a tourney is 5000 pang to stop the rookie pang hackers =_=; They said they increased capacity for BP but I’m really worried that we won’t be able to get into it especially with all the events going on now :S

Edit: Official site loads now. It’s really nice! There’s some great new wallpapers and Mr.ECard has been renamed to “Scratchy Card” hehe cute X3 They’ve also added things like a beginner guide as well as new profile images for the characters. If you notice, Nuri is wearing his Snowflake scratch rare outfit, so I have high hopes of us getting caught up on that soon. This is all really exciting, go Ntreev! 😀

Edit2: I lost my excitement when I heard that we are still in beta despite a cash shop being open. Not spending a penny until we are out of beta. If anything goes wrong, items not delivered, money not transferred, they will just say “oh we’re in beta sorry shit happens!”

So let’s start with the visual stuff first. We got an event: the usual pangya island tour. This is kinda like what Japan had where your prize is a season 2 swimsuit.  If  arbitrary so knowing my luck I’ll get Scouts or Uncle Bobs. The worst part is they still are disabling shops until further notice so you can’t sell or trade it with anyone 😦 Anyway I’d like to maybe do some group tourneys to get through most of this this weekend. I’ll probably try to gather everyone on twitter, or see if I can manage to mop up whoever I see online at the time ^^; However you can complete the island tour multiple times to get everyone’s swimsuits so yea we gotta get on that guys 😆

There has been a pang reset. Anyone over 100k got screwed LOL 😀 I only had 40k lmao so I’m ok! In addition there are some nice welcome back gifts above. I haven’t redeemed them yet but I don’t wanna redeem the auto caliper because I know it’ll go to waste until I get used to hitting pangya in 800 x 600 again T_T; It looks like we’ll be getting bonus items until May 30th just for logging in daily so be sure to do so!

New items have been added to the cash shop, which has also been added. The currency has been adjusted to fit within Ntreev Points. Now a lot of people are like blah blah high numbers but this is actually REALLY simple! $1 = 1000 points. 10,000 point item = $10, simple no? Before I never really bothered to count how much an item cost with astros/cookies cause the conversion rate was weird but now it’s pretty straight forward if you ask me. My question is what the hell is Air Knight Utility set? Does it increase your pangya zone? It’s so expensive but it has identical stats to my xmas clubs so I don’t see the reason to get this unless there is something special about it? I also saw a new Kooh outfit that I never saw before and they added Arin’s magician outfit hat (finally).

We got some season 4 items in the shop. Rich informed me these are all S3 items. Safety pin which makes your terrain 100% even if you’re in the bunker as well as the power potion to give you a double power shot.

Oh look not overpriced calipers! 200 for $3 instead of like $10 or something.

Mascots have been renamed to what I assume are the Korean names? In Japan these are the naems as well (well except Cocoa is Macaron unless that means black or something). 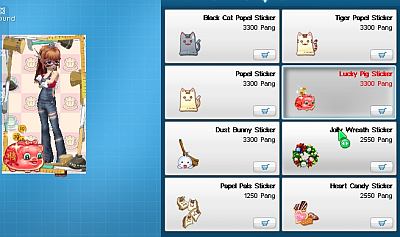 Decoration party! That’s right it looks like ALL stickers, ALL backgrounds and ALL borders are pang!!!!!!! Before OGP charged us astros for this stuff ugh! But now all the cute stuff is pangable! I still have my current slot and background which don’t expire for another 20 days so once they expire I’ll buy something new :3 The annoying part is, this stuff expires after 30 days, there’s no buy it for a year option how annoying x3

Finally we got some new comets (they are called comes now.) They are globe shaped, gold or blue, both are very cute. They essentially do the same thing as all the other comets as far as bonuses go. I guess Ntreev is showing they are going global and from what I heard they do not plan to ban any countries – however, GM Takeda told me in chat that if people spam the ticker in non english you can instantly screencap and report them! Please if you see non english in ticker report it, cause why should you spend your money telling people to speak English? LOL.

Here are the other updates:

Papelshop’s been updated. No more feathers, they have recycled old rares: illusion specs (curve +10 originally, now only Accuracy +1 – lame), blushes and rosy cheeks. This was released when I first played pangya and I was a noob with no money. I tried 60 times with the coupons I had saved but won nothing T_T; I don’t know if they lowered the rate or what but at this point, spinning ye olde paypal is the only way to get rares because shops are disabled – then again buying rares for 500k was never a hobby of mine to begin with.

They also fixed a few localization bugs (no more Hi my name is Brie!) and they have permanently disabled gifting pang items. Japan had disabled this before, my guess is because the system is really buggy and a lot of people never got the items they were supposed to.

Finally they added a rewards system. Basically when you level up you get some sort of a reward. Up until senior A you get a small reward each level, but afterwards you only get 1 scratch card per rank. Sadly I am Senior A (T_T) so when I hit Amateur E I’ll get 1 scratchy card ^^.

And that’s it for tonight’s updates. I guess it’s almost 3AM and the drilling morons have stopped so I can attempt to go to bed 😀 I’ll see you all on the greens tomorrow hopefully (after watching my weekly dose of Higashi no Eden of course :P)