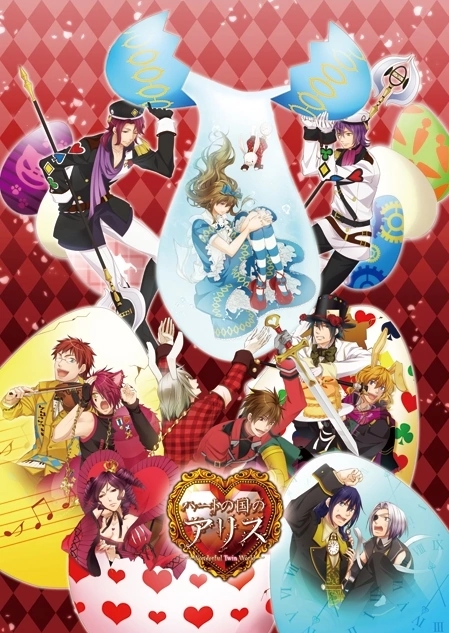 Who knew I’d play another Quin Rose game!? I guess boredom hit me hard this summer and with a lack of any new otome game releases period I decided to play the FD I never bothered to. It’s actually the FD to the first Alice game except they replaced Dee & Dum with Humpty & Dumpty. They claim themselves to be twins but they look nothing alike and Alice thinks she’s going crazy cause it’s not Dee & Dum lol. Nightmare explains that it’s just a “crazy storm” where everyone changes temporarily, except Alice, since she’s an outsider – and that’s why nobody thinks Humpty & Dumpty replacing Dee & Dum is odd except for her. So basically it was an excuse for QuinRose to justify changing people and making them O/C and while it worked in some it ended up ruining things for me in others.

END_OF_DOCUMENT_TOKEN_TO_BE_REPLACED

So I made the mistake of buying yet another quin rose game, but this will be the last mistake I will make with Quin Rose.  I loved the original Alice game, anyone who reads this blog will know it. Hell I’m even raving about how much I loved it in my original review. However my high hopes were crushed for the umpteenth time with this remake and after the jump is just a collection of rants about this game and Quin Rose in general. If you enjoyed this game or like Quin Rose, I suggest reading my original review and not going beyond this point! Additionally there’s CG spoilers everywhere so if you’re new to the game and don’t want to be spoiled it’s best to stay away. Otherwise, read on!

END_OF_DOCUMENT_TOKEN_TO_BE_REPLACED

Let’s be honest, this isn’t a sequel or an alternative Dia. This is really just Quin Rose trying to suck their remaining customer base dry by splitting the Dia game in half and releasing 2 separate games.  This time, Boris, Julius, Gray, Nightmare and Ace get routes but after finishing the game I can definitely say they could have easily combined the 2 into 1 disk by simply cutting out all the fat. Anyway I think I’m going into my final thoughts in the intro paragraph so I’ll stop here :lol:.  Basically Alice is once again in Clover no Kuni and she goes through the looking glass to find herself once again in the Country of Diamonds, with no recollection of any of the events that happened in the previous Dia game.

END_OF_DOCUMENT_TOKEN_TO_BE_REPLACED

Our heroine Alice Liddell finds herself falling down as usual with Peter holding her in his arms. She tries to ask him wtf’s going on but he magically vanishes without saying a word and dumps her into the country of Diamonds. The country of Diamonds major areas are the Castle of Diamonds, The Hatter Mansion, The Train Station and the Graveyard & Art Museum (which are right next to each other.) Alice is now in a new country but unlike her previous move from Heart to Clover, nobody here remembers who she is – except for Nightmare. Suddenly characters like Nightmare and Ace are shotas, Dee & Dum are only in adult form and Vivaldi, Gowland and Pierce are missing in action. Additionally the castle of Diamonds is run by the queen of Diamonds, Crysta Snowpigeon and the new prime minister is now a black rabbit named Sidney Black. Over at the art museum & cemetery area is another mafia with a leader by the name of Jericho Bermuda who is a dodo bird. Alice has to figure out what the hell is going on and at the same time try to convince everyone to like her again. Unfortunately unlike the country of hearts, everyone’s feelings towards her are as cold as a frozen diamond.