So I meant to play this game…last summer but I vanished into Wonderful Wonder World and it took me like 3 months to re-appear and by then I had forgotten about it. However after playing and enjoying Signed-X, I decided to give this game a shot. It’s a free English otome game once again by Glass Heart and can be downloaded from her blog. Also she has kindly provided a walk through so my review will be a summary this time. No CG spoilers though since there’s only 6 CGs in the game I figured it would be better for people to play and enjoy them on their own!

Iris just graduated high school and her summer is beginning BUT she still has some unfinished business. About 2 years ago, she wrote a love letter to a guy named Alden asking to meet her so she could confess her undying love. Alden never came and she’s had this unrequited stalking obsession with him for like 2 years. Now that school’s out, before everyone goes back to college, this is Iris’ last chance to confess at a graduation party that’s being thrown by her friends.

Seth – Seth is Iris’ nerdy childhood friend. He’s an anime and game otaku and he and Iris often watch some anime together while their other friend Cherri rolls her eyes cause she’d rather be shopping. Like all childhood friend tropes, Seth has had a crush on Iris for a while and has been writing Gary Stu fanfics about the 2 of them without her knowledge :lol:.  So yea it kinda sucks when Iris asks for his help to set her up with Alden by getting Alden’s phone number and asking what he thinks of her. Poor guy. (；´Д｀) When Cherri gets a boyfriend she ditches them and the 2 of them go eat popcorn while throwing rocks into a lake lol. Afterwards since he loses he ends up piggy back riding Iris home. When he gets to her house though, as she’s munching on popcorn he takes the opportunity and sneaks a kiss on her cheek （*´▽｀*） Not gonna lie man I was all like きゅん(ﾉ´∀｀*) here.  At the graduation party, Iris chickens out and doesn’t bother talking to Alden figuring it’s just a crush she’ll forget about. Instead she goes to hang out with Seth.  In ending 9, Seth confesses that he’s loved her for a while and says he plans to go away for college. Iris says she’ll think about going out with him and they can keep in touch via internet like they always do. In ending 10, which is the best end, they decide to become an official couple and their friend Cherri is not the least bit surprised. In fact she took a pic of them kissing and tells them to come back inside the club room for some caaake lmao. XD Needless to say, Seth is my favorite, I have a thing for geeks with glasses (if it wasn’t already obvious from all my reviews lol) ＼(^o^)／.

Alden – Alden is the plot point of this whole game.  He loves photography and reading and also plays the piano. Stuff on his online profile was tweaked by his friends to “attract da ladies” so Iris kind of made up this image of him in her head. Due to this he thought that she made him what he’s not and that’s why he didn’t want to accept her confession. About 2 years ago turns out Iris’ neighbor Devlin was 1 year above Alden and was friends with him. He saw Iris put the love letter into Alden’s desk so he was gonna tell everyone but Alden asked him not to do it. He says he was too shy to respond which is why he never did. Alden tells Iris that he has a list of things he wants to do before he leaves town and asks Iris to help him out. He goes taking photos with her in various places and asks her to go with him for an evening picnic. After they hang out and eat for a bit, he tells her that he plans to be a doctor. He also decides he wants to go through a brief rebellious phase so he buys some hair dye and dyes some front strands of his hair green lol. In ending 2, Alden rejects Iris’ feelings for him but they end up becoming good friends. In end 3, the best end, Alden not only accepts Iris’ feelings but says that his last thing on his list was to confess to her instead!  Being a shy dork that he is, Iris has to make the move and the 2 of them smooch outside the club after apparently having some underage drinking 😆  Alden was that shy prince type which I don’t really like but I guess he was still kinda cute, or maybe I just like the way Iris bullied him lmao. 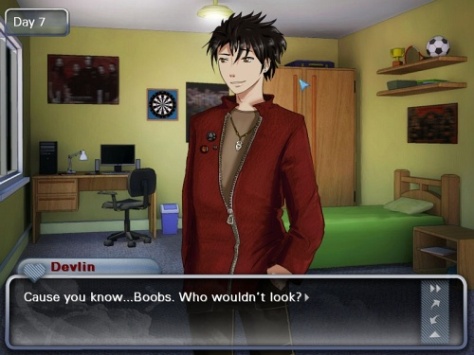 Devlin – Devlin is the resident badass and Iris’ neighbor. He’s one year older (probably 19 I guess?) and is constantly going into the hallway and smoking out into the window. His dad is an alcoholic child abuser and wife beater which is why Devlin’s mom left them and why Devlin is always covered in bruises. His dad gets home daily piss drunk and starts fighting with him and that’s why Devlin mostly skipped classes and became a delinquent. He often gets into fights with randoms but doesn’t always come out victorious. One of his past times is teasing Iris calling her Fluffy and generally making fun of her. Fortunately Iris has a heart of steel and most of his insults pretty much fly over her head. He tells Iris that he knew Alden wasn’t gonna go see her 2 years ago because she had hyped up some image of him that wasn’t really him. One day Devlin gets her to come and cook for him when his parents aren’t home. After she makes him an omelet his dad gets home so Iris has to hide in his room until the dad’s drunk and asleep so she can leave. She finds some poems that he wrote on his computer and he gets pissed that she read them but calms down when surprisingly she says she enjoyed them.  He also saves her from drunks creepin’ up on her at a bar that she runs into to hide from the rain. He tells her he tried to pay the bartender to NOT give his dad alcohol but of course it didn’t work. Before the graduation party, Iris overhears Devlin planning to rob a bank or something so he can get enough money to move the fuck out of his father’s place.  Good End: After Iris comes back from the dance she’s worried about Devlin so she goes to his place and tells him not to go. She locks him in his room and takes the key stuffing it into her bra lol. After fighting for a bit she convinces him not to go cause she don’t want him to end up in jail. She then suggests that he become friends with Alden once more so the two can share an apartment and split the rent. Iris and Devlin then confess their love and she asks him to stop calling her Fluffy though in revenge she calls him Devli-poo lmao xDDD Best End: After the fight in Devlin’s room, Iris decides the only way to stop him is to physically hold him so she death grip hugs him and he gives up and goes to sit on his bed. After she suggests he makeup with Alden and all, Devlin gives her a kiss figuring she liked him already. They don’t admit it but they mutually know it’s uh sexy time in Devlin’s room for the rest of the night xDD.

Just like Signed-X I enjoyed this game a lot. I really love the creator’s writing style and especially LOVE her heroines. It’s really funny the pattern you notice when playing English games the heroines are usually hilarious and have a distinct personality. Then I go back to (at the moment playing Hiiro no Kakera 3 FD) and I’m just facepalming non stop about how flat and dull the heroine is. (Aside from the fact that the personality she had in the original game has completely disappeared but that’s for another post.) Devlin was definitely that  “attractive bad boy type” but I cannot resist the nerdy megane so Seth was definitely my favorite of the bunch. Unfortunately I found Alden to be the most boring one and since I played without the guide first, when he rejected me I was like HOW DARE U DUDE and I just wanted to go after Seth again lmfao xDD Anyway the game is free, the characters are great and aside from the CG/sprite inconsistency(I guess it was done by 2 different artists?), I don’t really have any complaints.  I definitely recommend to play this especially since now it’s the appropriate season for it!