I haven’t seen too many reviews but I managed to pretty much unlock most of the game over the Easter weekend so I figured I’d write my thoughts.

I’m not gonna lie, this game has a great concept but it’s not project Diva. In fact aside from some songs being easier than Diva, the game overall is terrible.  First let’s go through the system:

The system is like project Diva where you have your rhythm game, Gumi’s room, shop, tutorial and LAN play as well as your profile section with all your stats. There are custom loading screens as well:

The song levels go from Easy, Normal, Challenge and Expert. I’m not sure what the hell I did but once I unlocked every song and played a few on Expert and Challenge I ended up unlocking all the outfits. The songs I didn’t recognize a lot of but I really liked Rozetta (also my best song)  and Killer Lady. Now here’s where my mass of complaints comes from. If it wasn’t obvious, the graphics are very poor compared to Diva. During the costume change sequens I’m greeted with some jagged photoshop shape hearts: 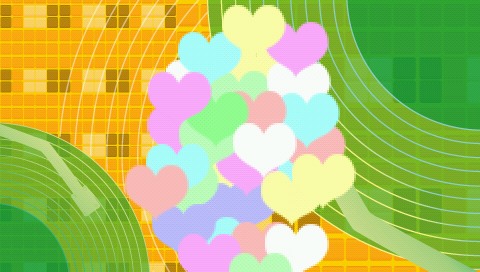 Once the ugly heart sequence goes away Gumi shows off her outfit. My complaint is the background throughout the whole game is this fugly yellow & green. Like okay I get it, those are Gumi’s colors but couldn’t you at least put it on a black background or something where the outfit doesn’t blend with the background:

Secondly for the most part…THE OUTFITS ARE UGLY:

Even if the outfit looks okay, they then give her ugly hair and it ruins everything: 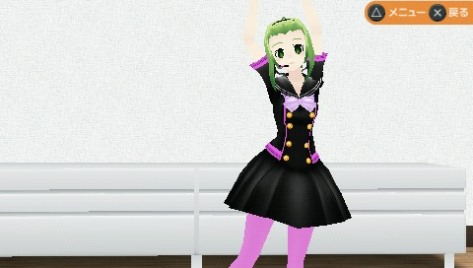 In the end the only 2 outfits I ended up really liking were these 2:

The other thing was some of the outfits had different names but looked IDENTICAL TO ME. WHAT IS THE POINT:

As far as song difficulty it started out as pretty easy and was somewhat challenging until I got to my favorite song:

This game is like UtaPri Music in a sense where you can’t interchange keys like you can in project diva. Nope the arrow pad and key pad are totally separate so you have to quickly move your thumb from triangle to x without time to think. Also since everything goes in a straight line (and not all over the screen like in diva so your eyes can move around)…IT MAKES YOU DIZZY. Seriously playing this song actually made my eyes spin after a while which pissed me off since this was the big reason I wanted to play this game. （￣□￣；）！！

After you finish the game there’s a cute pixelated Gumi on screen but unlike Miku you can’t actually do anything with her and they just repeat the same scenery over & over..

On the topic of repeat footage, in project Diva all the background videos had some thought put into them? Sure some of them were just Miku dancing on a stage but others at least told a story. Here, every video is Gumi dancing on a stage and there’s only like 6-7 stages(?) so you will see her dancing in the same place over and over….

One of the new bonuses I did not see in Diva is Gumi’s diary. I guess if you play and rank up you will unlock her diary entries. Sadly none of them are that interesting and they make her seem really dumb and airheaded….

Additionally every time I started to play a song her “are you ready” would cut off like a broken record. Loading times felt slower than Diva and to change costume you had to change it for “every song” rather than just putting on 1 outfit and wearing it for every song until you felt like changing. The songs themselves were short and cut off so it was great for songs I didn’t like but terrible for songs I really liked and wanted to hear more of. 😦 As far as personal rankings at least I managed to perfect my favorite song even if on easy mode.  I could never seem to perfect anything on Diva lol

Anyway you can find play through videos of this game probably on Nico or Youtube since I didn’t broadcast this game or record any of my gameplay. Unfortunately I will have to side with the Amazon reviewers that this game is just terrible and I feel bad for Gumi that her debut game was so poorly done. I honestly think the makers should really have thought through the fact that MOST people playing their games will be Project Diva veterans. We’re not asking for a DIVA clone but when you have so many worse qualities it just puts a bad image on the overall product. Also they get major minus points for not using a single Easypop song! 😆

15 thoughts on “Megpoid the Music Review”