So since I got a 6 month subscription to B’s-Log I figured I’d do a monthly review post on the issues I receive. Each issue is released in Japan on the 20th so I will probably get it a week later. I may be behind on the news but I guess this is more of an interest gauge post to see how many people are interested in me doing this? It seems like most of my otome gamer friends already either get the magazine before me or download it someplace –  so maybe nobody will really bother to read this but here we go xD;

To be honest I have no interest in this whole series. They’re marketing it as Yura’s art and look at these seiyuu gravures but….

No offense to Mizushima, I love the man’s voice but I think I speak for a lot of people when I say we want to see 2D men not the 3D men who voice them…..most seiyuus are not gravure material…I sincerely wish they would stop wasting B’s Log pages on this ^^;;

These are cute! No idea where I can even stick them to be honest and I didn’t think they’d be so large! I should put Tokiya on the mirror that came with the magazine. And yes that is the next goody:

Omg what the huge. I thought it was a compact mirror as in “a small pocket mirror” not a giant mirror I can put on my desk and use it to put makeup on with lol. Look at the size compared to my PSP 3000.

With my newfound love for Quin Rose, I proudly hang this on my wall. Thinking about limited edition of the game as well.

Looks like a new drama CD series collab with Yone doing the artwork. She’s like whoring herself out everywhere now that she’s left Kusomate!! 😆 I don’t really listen to drama CDs though so other than the pretty art I can’t say I care much. I don’t think I’ll be hanging this one up; I’m tired of dudes with horns come out of their heads from Yone xD.

And now for all the magazine stuff:

Ok so far as as UtaPri debut – unless I’m reading it wrong – there may be some kind of brief scenarios with the senpais. Gameplay is identical to all previous games. As usual Natsuki loves everyone ＼( ^o^)／  The July issue of B’s log coming next month will have a special drama CD with Sho & Masato. It looks like you can get the dream cushions on Rakuten but sadly their store doesn’t ship globally so time to find a good 3rd party xD.

For those who haven’t heard it from Girls Style, this will be Kazuki Yone’s new otome game that she’s doing for Broccoli. The story appears to be involving Greek & Japanese gods so I gues we’re gonna have like Amateras and Zeus fighting over the heroine or something lmfao xD. It would be epic win if they had Kondo voice Zeus again…. (✧≖‿ゝ≖) They keep promoting these 2 characters but I hope that’s just a teaser and that the game is more than just…these 2 characters. Then again with that ossan hoihoi game by Blue Moon I can’t be too sure anymore.

Otomate’s milking Amnesia some more with drama CDs & character songs. Whatever. 🙄 Moving on.

After winter is just around the corner and SuzuKen says that the game will be rich with play volume because he said he had a ton of lines. In fact he thinks he had more lines than anyone in the game. The pages also contain hints on which game choices will raise affection ε=＼＿○ﾉ ｲﾔｯﾎｰｩ！ Now I don’t have to wait for a guide!

I’m sure everyone is dying to know what’s gonna happen with the actual game. I read through it and picked up a few points. They wanted to make the heroine ” unique” from all other heroines which is why they gave her that poofy blonde hair. I’m hoping that also means she’s not gonna be a TOTAL doormat though I’m not expecting Quin Rose level asskicking. The game system appears to be kinda like Vitamin X where you will read the prologue and then pick a dude and do his route. By route though it appears that rather than it being an adventure game it’s just a situation game so actually I guess it really will be like the CDs. You pick Raito and have him drown & sexually harass you for 3 hours. ( ´_ゝ`) Hm not sure if I want lol. Rejet also promises “racy” stuff so I’m guessing lots of implied secks and other naughty things 😆 Creators comments mentioned Raito is a maniac perorist (licker) lmfaooo. ﾌﾟｯ(※థэథ)∵.*.∵ They mentioned Shuu has a closet full of the same cardigan and in his CD supposedly he is super do-S but in a way that “pleases” the heroine. “Come lick me woman you know you want to.” Well I suppose it beats drowning & bitchy shotas?

I feel like they’ve announced about this game almost a year ago and it still hasn’t been released. It’s coming out for the PC (for once) but I feel like I haven’t seen any progress with it except maybe a few cgs every 4-5 months. I guess due to this my interest hasn’t been high or maybe after Arcana Famiglia mafia games make me rage.

So I really dgaf about drama CDs but I’ve kept my eyes on Virus School because it’s the same artist that did all those cute Starry Sky chibis. It started as a 4koma and now it’s being turned into a drama CD. Hey if we can have a drama CD about food men turned into an otome game, I am keeping my fingers crossed that I get to date the Killer-Tcell-kun sometime in 2013 😆

I’ll be honest, I am no longer looking forward to Koisen Love & Peace. I wanted it to be another Hotokenser but it’s not going to be because the heroine is an eyeless sack of air. All the Cgs make it quite obvious that she doesn’t matter and you can tell the official site doesn’t give a damn about her when she’s not even LISTED AS A CHARACTER. I wouldn’t be surprised if she doesn’t even come with a default name. ( ´_ゝ`) Sorry but unless I have an awesome heroine who is also one of the rangers, this will never be as nearly as awesome as Hotoken was.

Not much to say about Storm Lover Kai other than щ(ﾟдﾟщ)ｶﾓｰﾝ. I haven’t played the original so this is really a pleasure to play a nice version from the start!

Anime adaptation of a game that’s still in my backlog. At least it’s an OVA so hopefully their budget is higher than Hiiro no Derpkera. 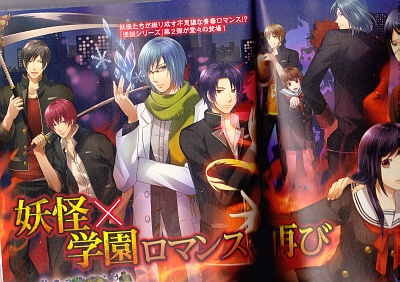 Spinoff game ｷﾀ━ヽ(∀ﾟ )人(ﾟ∀ﾟ)人( ﾟ∀)人(∀ﾟ )人(ﾟ∀ﾟ)人( ﾟ∀)ノ━!! This is like the best news for me and Quin Rose already has the official site up. I can’t wait to play this! Maybe this time I will buy the limited edition to get the manga furoku that comes with it. The heroine Ui looks like she’s as badass as Shizuka and won’t take crap from anyone being the princess of a dragon clan. Also like Shizuka apparently she harbors a great power and cannot control it either so it’s been sealed inside of her.  The characters look a lot nicer than in the first game so I’m really excited for this one. There’s also a tengu guy whose last name is Tobiura but first name is Wakaba…maybe he’s a relative of Moegi from the first game? We’ll find out.  The sample CGs kinda look like the ones from the first game so I pretty much expect a lot of similarities but to me it’s just “more of a good thing”.

This game should just be considered illegal robbin’ da cradle or something lmfao. The fact that they shamelessly LIST THE FREAKING AGE GAP at the top….the fact that one of those age gaps is great than my own age….. (#ﾟωﾟ ) お断りだぜぇ. The worst part being of course that each game only has 2 characters and costs like $35. What a joke lmfao who is gonna buy this? I can see them wanting an age gap but can’t they at least make the heroine of LEGAL AGE (20)?? 😯

Hansel is a MASSIVE TSUNDERE. LMFAO I AM SO EXCITED TORIUMI IS VOICING HANSEL AGAIN dsfdsfsd Y⌒Y⌒Y⌒Y⌒Y⌒Y⌒(。A。)ｱﾋｬﾋｬﾋｬﾋｬ!! So anyway this made my day lol! Also Kishio said in his cast interview if you play this game you will get a chance to experience some リア充 hahaha XD.

I’m still crawling through the first game but definitely looking forward to the 2nd one! It’s too bad they couldn’t get Fujita Saki to voice Rosalia in that one, woulda been pretty funny XD.

I wanna play this because I did like the first game but changing the artists & getting rid of poor OnoD (replacing him with Toriumi)…not sure how I feel about this. I’ll probably give it a shot none the less though.

Skipping past Trick or Alice (the art is nice but hiyo is writing it and I haven’t really seen any news about a release date.) Skipping past Hiiro 4 (which is really 5 go to hell Otomate.)

Mmm naked mans (✧≖‿ゝ≖). Otomate rage aside I am looking forward to Confidential Money. The CGs look way better than some of the derp I saw in Musketeer so hopefully it’ll be as awesome as Death Connection was.

If the tracing wasn’t bad enough now they delayed the dam game back to May 31st. Seriously if you trace, what’s the delay? That doesn’t take much effort at all! 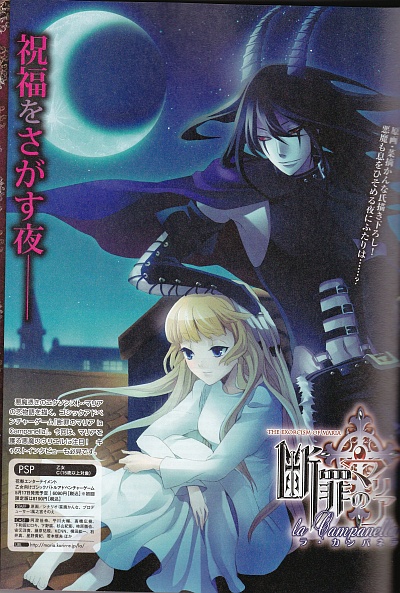 My excitement for Danzai no Maria  La Campanella kinda died the moment they announced a Director’s Cut to be released in July. With the demo being in huge PC size what is even the point of buying the PSP version?? Sigh Karin you and your non stop porting disappoints me. I won’t be buying this game anymore.

I was hoping L.G.S. would be as funny as S.Y.K. and judging from this screenshot we may have a winner? Hopefully it won’t have psp crashing bugs like the SYK fandisk did or else…… ( ಠ益ಠ )

Custom Drive is looking to be more and more interesting. What girl doesn’t love dress up games! But getting the chance to dress up your dude = awesome. The only thing that worries me is the heroine has a hot man allergy…this can’t end well.

Didn’t have time to read all the detailed interviews on some of otomates games (not that I care tbh…) but that’s pretty much that for this issue. Hope you guys found this post entertaining & informative!