Cause apparently a shit ton of things were announced I figured I’d translate it! First the next town will be called Aisen: 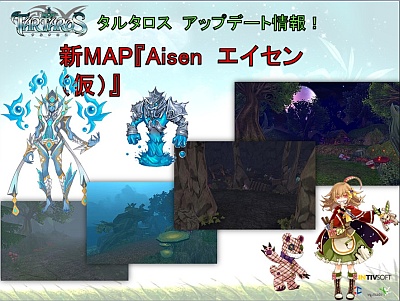 Most likely will start from level 68. Seeing how the level cap was just recently raised and there’s about a 2 month span between level cap raise I’m guessing we can expect this at the end of August, early September.

Upcoming August (?) Avatars. I just love Pinkos *v* but yea it’ll prolly be so insanely expensive I’ll never be able to afford it (´･ω:;.:… Aerlot & Cromodo look so gay. I bet that was intentional.

Some new upcoming systems were announced:

In Korea, Tartaros is made using 3D studio max just like Pangya. I guess that’s the thing to use now. So funny since I think in America most people used Maaya? At least that’s how it was back in 2002.

For some reason I expected more girls but I guess that’s already a good break for the sausage fest of MMO games.

Looks like there’s more ossans that play Tartaros than lolis & shotas but seems like the game is basically popular with college kids & OLs/Salarymans? 😆

I don’t really like Wheel of Fortune THAT much…but I totally agree Burning Obolus is pretty damn awesome. Still, I think Kaver Shard Orbit is like one of my favorite Tartaros BGMs lol.

Apparently for the Madoka collab 99,381 Avatars were won on all 3 servers…yet I hardly ever see anyone selling or wearing them （ಠ_ಠ）…also I guess for the 2 Grief Seed events over 11 million were collected.

Next anime collaboration will be with Kopihan. Wtf is this shit （ಠ_ಠ） Why can’t we get a collab with something people actually know about like Madoka OTL. First of all there’s only 2 guys in that picture, that means all the avatars I bet will be female only again (with pinko getting shafted because of her robot part 1000). All I know about Kopihan is that the artist is the guy who designed all the Crypton Vocaloids, KEI. Also Dengeki Online is scheduled to release some Tartaros manga but I don’t expect anything out of it. Hopefully I can get my hands on some raws.

Anyway that’s all I got from this. Very exciting I guess? I’m still level 65. I feel like it takes me 15 days to get a level now, but that 2.5 exp event, I got my 1 day anti fatigue thing and some level 70 and below 20% remove fatigue pots ready щ(ﾟдﾟщ)ｶﾓｰﾝ