A lot of crazy stuff happened this week but I will try to focus on the positives instead lol. A small change was that I left my friend’s FC after a year in order to focus on building airships and submarines and we massively powerleveled it in about a day, grabbed one of the few remaining houses and began work on the massive amounts of cobolt and darksteel ingots.

We had moved into apparently a massive paissa house ward so I was right at home. Our subward has at least 6 other Paissa skinned houses (which btw Japan hates so my husband calls us the cursed ward XD)

Since I already have a personal house I decided to turn the FC one into a giant photo studio. My previous FC room was a studio and I still wanted a studio but I figured a house sized studio might be even better! But yea I guess our ward is so cursed nobody wants to visit so thanks to the few of my friends who stopped by to take pics (´;ω;`).

Our impromptu Heaven on High static got its 2nd clear over the weekend as well. Had many a scares in floors 81-90 as usual but managed to make it through somehow 😂. Good god I hate those patrollers probably more than chimeras now lol.

Since Japanese players love housing we decided to check out housing on other servers. We visited a famous Forest Wedding House on Pandemonium, an FF15 themed house and a Nier:Replicant themed house while cosplaying 2B and 9S! 😀 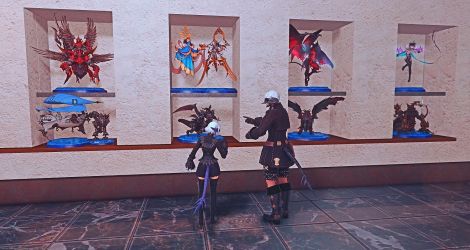 I haven’t been visiting too many user run cafes lately but this morning I stopped by KFC – a Kentucky Friend Chicken themed restaurant run by Kyoro-chan and his wife. It was really crowded today probably because it was a limited time run that as normally only done during the Christmas season. It was also the final night of Golden Week for Japan so I guess everyone wanted to party hard lol.

FFXIV Instagram also teased an aetheryte picture from Shadowbringers (but make sure not to read the comment section or you’ll get an aneurysm).

I’ve mostly been working on getting all my subjobs on my Japan character to 70 and big fishing on my NA character. Weekends we spend climbing Heaven on High (and freaking out in voice chat) so overall that’s pretty much the course of things until the expansion.