I know you’re probably thinking I’m high for playing anything UtaPri ever again but my addiction to music games knows no bounds apparently. 😂

So just to tell you right off the bat, this is basically your avg music mobage and since Yumecast is one I’ve played for a while now (with huge breaks here & there because it’s getting so repetitive) I will make some comparisons. 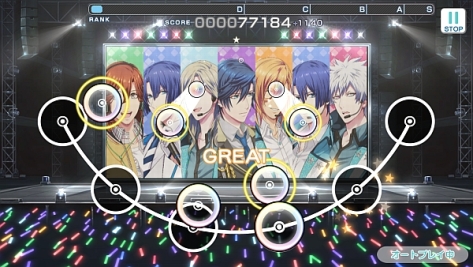 Music game is basically like most of the music games you find out there. Notes come flying at you, you press them as they touch the circles. For some odd reason, unlike idolish 7 this one doesn’t make me nauseated and while it’s a bit hard to get used to, with practice I can probably get gud.

Unfortunately getting gud isn’t gonna get you S rank because even with full combo, unless you have a lot of UR/SR cards you just won’t be able to get a high score…which obviously brings me back to the whole “not dis shitto again gacha mobage”. While yes it does require you to gacha, you absolutely  DO NOT have to pay money! 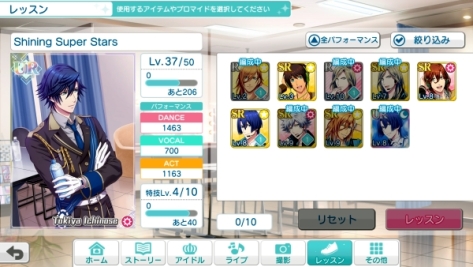 In fact with all the launch bonuses/events going on I managed to snag 2 URs, a bunch of SRs and level Tokiya’s UR to level 37. This is all just from playing the songs I like to play and just enjoying the game for its core system.

In the tutorial you can pick your favorite guy to always be on the screen with you and say good morning/goodnight and stuff to you. The best part is this is based off your phone’s clock so no more of the guys telling you good morning when it’s like 9PM at night because you’re not in Japan! As you play more songs and use your dude’s cards their affection levels up more and they say more phrases to you. 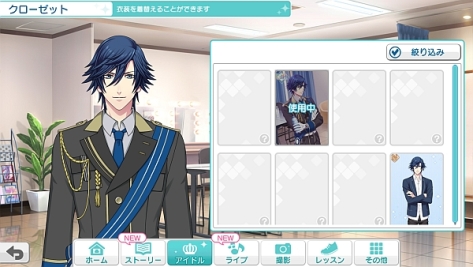 As you play songs you can get a currency to level up and unlock various features of each “card”. For example you can unlock the outfit in the card and have the guy in the live 2D wear it as well. 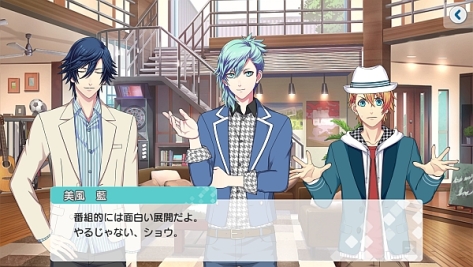 The core system of the game basically involves reading a story → unlocking a song → clearing song → unlocking more stories. Honestly I find the stories kind of uninteresting and dull and well if it wasn’t obvious, Haruka does not exist in this UtaPri Universe because the heroine is YOU~ 😂. Oh and they’re totally buttering up the fujoshi fans becuase there’s a feature with some kind of “heart link” which literally just looks like a love meter between the guys lmfao 😂😂😂.

Uta no Prince-sama in a nutshell pic.twitter.com/Yg3AfqJk1V

I have yet to figure out how to raise this or what it does but still, lol Broccoli.

All the songs are songs you heard in previous utapri and utapri music games so if you were a fan of all the songs in all those games (aka me) this game is definitely for you. Not only that but the system is much easier on your hands compared to the garbo system on the vita where you literally destroyed your right hand trying to complete the hardest mode of each song.

As of now the card designs aren’t really anything special. The current draw of the game is playing the tons of utapri songs and unlocking them (and it will get slow because at the moment you only get 1 story ticket per day and 1 every time you level.) Just like with Yumecast, after a while, they will probably run out of songs and the game will basically only be riding on new gacha cards. Until then though, it’s still a nice music game to play if you ever just are in the mood to play your favorite utapri song without having to bust out your PSP or PS Vita and deal with the old shitty music system.

The biggest QOL this game has over Yumecast btw is AUTO MODE. Yes you can literally have the game auto play itself, but you get a lower score. Still if you can’t clear stuff in hard or ex modes this is literally the best thing ever. Also when you gotta grind a song you don’t like X times, another great use for this. Honestly most music games should have this as an option!

Below is a video I recorded of myself clearing a song so you guys can get an idea of what the system is like, enjoy!

Currently the App is not available outside Japan but if you can get into Japanese Itunes or use QooApp you can download it and play it in Japanese! They did however confirm that an English version would be released at some point. If you do get the app feel free to add me to your friends list, my ID is 457444197!