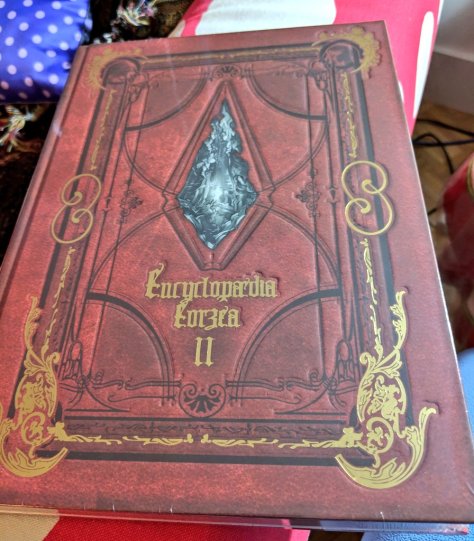 I have a shopping guide I made for importing games but I would like to take time out to share an experience with an American online game store that I will absolutely never do business with again. I hope this will serve as a warning for any future buyers ( and tbh I just want to rage about how shitty this store is 😂).

So I’m an avid player of FFXIV and one thing I love about the game are the lore books. The first lore book came out in 2016 and I had preordered it with the FFXIV “Duality” soundtrack. Once both were released though, I was told they were “out of stock” on the Duality (even though it was a PREORDER) and I heard stories of people receiving copies of that soundtrack when they bought it after the release date. After waiting for a week I got really tired and just told them to cancel Duality and just ship out my lore book.  Fortunately that time, it went fairly easily and I got my refund but never bothered buying the soundtrack just out of spite/anger.

They were now releasing LORE BOOK II. Oh boy more FFXIV Lore I can’t wait! I was apprehensive because of my experience 2 years earlier, and I had not bought anything from that store since…..But I thought well it’s a different store vendor this time MAYBE IT WILL BE BETTER.

On September 17, 2018 I placed my preorder for the book which was to be released on November 24. Come November 24th, all my friends in Japan are getting their books but there’s no movement on mine in fact it was still listed as “Pre-order” on the store. I also noticed a “Debit Now” button so I thought “oh no is it because I didn’t press this button my order wasn’t shipped?!” I panicked, and pressed the button and had them charge me 60 bucks. Days go by, with dead silence. Other people are getting shipping emails, but I’m not. What’s going on? I decided to contact their customer service – which by the way is an EMAIL FORM HIDDEN DEEP INSIDE THEIR FAQ. They have no phone number and if you try to contact the general Square Enix account help line, they will tell you they have “no information on anything at the store.” Cool, the left hand has no idea what the right hand is doing. After contacting them via email I got a response: 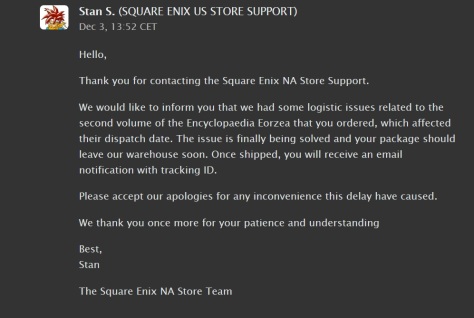 Ok then, fine I will wait. A week goes by. Nothing is happening. I even hear people who are now ordering right off the store are already getting shipping emails. What the hell? I send another email asking if I can cancel my order since it hasn’t shipped, and get the following response:

Oh really? It’s being prepared for shipping yet people are placing orders and already getting shipping emails no problem HMM? Another week goes by. We are now 2 weeks past the release date and it feels like everyone but me has their book. Suddenly I get another email: 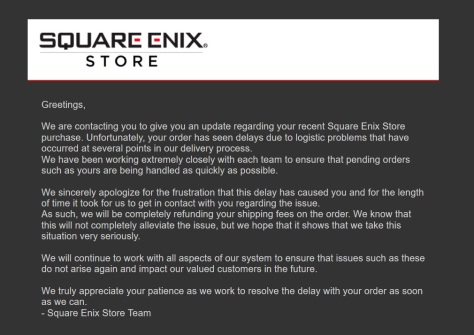 Oh swell! A shipping refund! Okay fine $10 off for my grief I guess. Everyone gets their shipping refund over the weekend – and I am back to being stuck in dead silence. I contact them again this time threatening to report them to FCC/BBB and do a chargeback to get my money back unless they give me a tracking number and refund my shipping. 2 days later, I get a tracking number and notice a refund on my shipping. Wow, amazing what happens when you threaten them. Finally on Wednesday of this week my book arrived and I was just gonna forget about all of this bullshit until TODAY…….when I got the following utterly idiotic email:

Holy fuck. Guess what you dumb CS idiot, I already got my refund and maybe you would have known this if any of your staff fucking knew ANYTHING that was going on in your store. (ノ｀Д´)ノ彡┻━┻ But you don’t, you just send copy and paste bullshit responses like you have all the previous times. Had I not gotten my refund of course I’d just copy & paste their own bullshit email right back to them….but I have my money, my book and the hell with this garbage store and its customer service.

Meanwhile the Japanese E-Store everyone got their book all fine, and on top of that they actually sell both the ENGLISH and JAPANESE editions of the book! Japan also puts the Japanese edition of their book on Amazon Japan but try to find the English version other than Square Enix store? NOPE. So they keep these products hostage for English players and then keep people’s money hostage by giving them the run around on top of it! I do pretty heavy online shopping and I’ve never dealt with a store THIS incompetent in my life. How does Square Enix allow these fools (Scalefast) to continue running this store? How are they just straight up not losing money? At least 2 of my friends were affected by this and multiple others who voiced their concerns on the FFXIV forums. After doing some digging apparently they also failed to deliver people’s 4.0 expansion preorders last year as well. If you google there are COUNTLESS ISSUES with this store. But have they attempted to fix or do anything about this? No. They could literally just partner with Amazon and probably be more competent than whatever monkeys run their store right now.

So let this be a warning to you – even if you may never have had any problems before, until they partner up with a decent vendor, there is a VERY high chance you WILL run into problems with their store. If you can buy the item elsewhere, the shipping will probably be cheaper too (especially if you are in Canada.)  And now I’m going to finally sit down and read through the lore book I waited 3 months for. 😓