This is the fandisk for Yunohana Spring which contains the after story following the good end of the first game, another and if stories which are side stories and extra ends for some of the side characters.

Just a brief review of If and Another Story main plots because they are basically the same for all the characters.

Another Story: Kintaro wins a pair of tickets to a resort inn and then Takahira tells everyone that his family owns it. He then lets everyone stay there for free but they gotta pay for everything else like food etc. So now Takahira & everyone at Fukujurou gets a free beach vacation trip! They stay at this inn that’s understaffed cause the okami is sick and the wakaokami is off on vacation. So they give them some advice to deal with customers as they spend the time checking out the local scenery and onsens. Also Takahira saves the ass of the other inn cause all their staff is sick, on vacation or ragequit.

If Story: Yunoha’s childhood friend Souichiro (the new character in the game) comes to the inn because his grandpa used to be in the same position as Kintaro currently holds. He wanted to make sure that the inn is running well so he basically comes to work there for 5 days. In the meantime you basically have Yunoha’s relationship with every guy “reset” just like in Another Story and in the end the get close to, but don’t fully confess their feelings for her. They also help some idol guy out from his slump by taking him around various places in Kanazawa.

Kota – They run into Kota’s older sister that he’s terrified of 😂. She’s been living in England with her husband so they were surprised to run into her. His older sister Hinako and younger sister Kotomi both bullied him when he was a child 😂😂. The plot centers around how he stays at Fukujurou because he idolizes Haru, the head chef,  and that’s why he wants to continue to work under him. They also find out the reason Hinako came there was because she got into a fight with her husband cause he made her banana pancakes instead of raspberry ones.  😅 End 1: Yunoha & Kota get married but she has to keep her ring off while she works. Kota says it’s fine since now she’s Saeki Yunoha so the ring isn’t such a big deal. Kota then suggests Yunoha wear the ring on a necklace chain instead. End 2: A scene of Kota & Yunoha on their wedding day.

Kintaro – After getting her design degree, Yunoha returns to Fukujurou to work there as wakaokami again. They’re getting closer to planning their wedding and otoutokun Gintaro feels left out. Honestly I don’t know why they need to get involved in marital problems of their guests. Also  I remember this couple from the first game and honestly their marriage already seemed on the rocks, I don’t know how they thought they were ready for a child. At the end Kintaro & Yunoha get into some dumb argument about her shampoo then they trip and fall and kiss each other while everyone looks & takes photos. (Umm okay? lol) In the epilogue they get married as usual in the traditional Japanese attire. In the 2nd ending, they’re married and Kintaro complains that their newlywed life isn’t as amazing as he had pictured. Yunoha makes him a bento and kisses him on the cheek to calm him down.

Nao – They had a fight and didn’t speak for 2 weeks so he comes down to Kanazawa and they make up. Unfortunately awkwardness ensues when Yunoha finds out Nao’s dad wants him to marry in an arranged marriage. And of course Nao’s dad tells Yunoha to break up with his son. To prove herself worthy of Nao’s dad, Yunoha enters their company’s fashion design contest. Unfortunately she doesn’t win so Nao sets up a meeting at Fukujurou with himself, his dad and Yunoha to explain why he wants to marry her and not the arranged fiance. After seeing how passionate they are about each other, the dad gives in and admits that there actually isn’t a fiance at all.  It was all a lie to test how serious they are about their relationship and that Yunoha wasn’t just some gold digger. ┐(´д`)┌ﾔﾚﾔﾚ In the epilogue of the first ending they have a western style wedding ceremony. In the 2nd ending they ichaicha in bed together after being married.

Umenosuke – Ume only has his after story and nothing in the another/if story. As usual like in the last game, he’s always hiding until you actually get to his route lol. One night Yunoha catches Ume on the phone with someone outside but he doesn’t tell her who it is so she gets upset and emos all to herself. Turns out it was a phonecall from his company asking him to come back to them to work. He then tells Yunoha the truth and yay problem solved, such deep plotlines! As usual in the epilogue they have a wedding ceremony. Also Kintaro cries at their wedding cause he got cucked 😂  In the 2nd ending its a CG of them post humping lmao. I love how the guy who’s never around gets the most action…again! 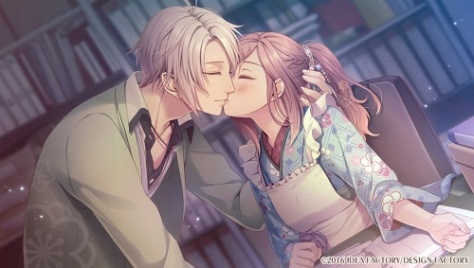 Takahira – He’s working at Fukujurou with Yunoha and planning their wedding and honeymoon but she’s tsuntsun towards him as usual. Her mom is totally on his side cause he’s the son of a rich company owner and does a great job at Fukujurou. 😂 So then they get some bitchy bba guest, who demands Takahira tour Kanazawa with her because Yunoha left some dandelions in her room. Yunoha also finds out in middle school Takahira was a loner and hated most ppl in his class lol. One night Takahira says he needs to return to his family hotel for 2 weeks and promises to tell Yunoha the details upon his return. Time passes and Yunoha misses him so he drops by her office one night and gives her a kiss. 😊 The next day Yunoha hears from her mom that after Takahira quit his hotel the staff and management had a huge turnover and they asked him to come back to try to clean up the mess. Yunoha gets annoyed that he didn’t tell her any of this so she goes to his hotel directly. She finds out the Izumi group is building a new hotel and they wanted his brother Takayuki to run it. Takayuki got overloaded with work and got hospitalized so they asked Takahira to run things in the meantime. Yunoha tries to help them by having a communal dinner at Fukujurou with employees of Takahira’s hotel. Eventually Takayuki returns to his post so Takahira comes back to Fukujurou and makes Yunoha some omurice. In the epilogue is their wedding ceremony. In the 2nd ending, the two of them are in a bathtub together on their honeymoon talking about memories of their wedding.  😘

Ginjirou – Gin chan just has a short ending in the if story. They basically go watch the fireworks at night together. They get ice cream afterwards and he licks ice cream off her face. That’s all fine & dandy if he wasn’t. ..12. 😒 In the epilogue,  many years later Ginjiro is finally grown up and legal while Yunoha is the new innkeeper taking her mom’s position. Gin chan stops by to let her lean on him so she can relax after a hard days work. 😏 Ironically he just looked like Kintaro with slightly different hair to me lol. He tells her to stop treating him like a child and see him as a man.

Takayuki – Takayuki has a short ending in another story. He tours around with the idol dude like the others and then at night gives Yunoha his jacket and walks her back to Fukujurou. In his ending, the idol dude sends them a box and a letter saying that Takayuki  & Yunoha make a good “age gap” couple. Takayuki then asks Yunoha to go on a date with him.

Souichiro – Souichiro is weird because he’s so shoed into this game.  I mean she completely forgot he existed. I’d think if they at all had a long lasting enough friendship she would remember him. 😅As usual a lot of the time is spent entertaining the idol guy. Seeing how Souichiro was a newly added character I really hoped they’d do something more original for his route. In the end he just tells Yunoha he gonna hit on her but Yunoha is hurp durp what? He comes back during college spring break to work at Fukujurou again and this time he’s upping his game to get Yunoha to return his feelings.

I mean I know I shouldn’t be criticizing a fandisk but come on….it’s a fandisk…don’t I at least deserve some fanservice? (´・ω・`) The fact that If and Another story were mostly copy pasta which you skip through after the first run. The fact that despite being a game about HOT SPRING RYOKAN there’s literally only ONE SCENE of people in a bathtub and it’s not even at the hot springs ＼(^o^)／. I know the game’s trying to be all pure and chaste and stuff but come on…fandisk..throw me a bone. I don’t even know why I bothered wasting money on the limited edition box. There was nothing new or special about the booklet that came with it and I have yet to listen to the drama CDs. It seems like the game was riding on you really liking the characters and well honestly all the routes are kinda forgettable to me except for Takahira anyway. And wtf Umenosuke WTF. Gets the most ero CG out of all of them and as usual never appears in the game except in his own route. The only fanservice this game gives is for TsudaKen fangirls! ／(^o^)＼ Don’t get me wrong, I like TsudaKen, but Ume was a crappy undeveloped stealth character that has no place in this game anyway. Also throwing in the “new” childhood friend was so pointless…the fact that Yunoha completely forgot about him and now you expect her to suddenly fall in love with him because he spent like a week helping out? Ok then. (눈_눈)

Meh I’m just disappointed because I don’t feel like Yunohana really even NEEDED a fandisk. There’s so many other games that deserve FDS (*cough Trigger Kiss and Binary Stary cough*) but they somehow chose this one. I feel fandisks are good for games that are focused on a deep plot and so you want to see a game where the characters can “relax” from said plot and enjoy their romantic time. Yunohana already had this in the first game, it didn’t need another rehash of the same thing. Not sure what I really expected, other than WHERE ARE THE HOT SPRING SHENANIGANS, but it certainly was a disappointment. The only thing that really stands out in this game for me are the cute CGs and of course my husbando Takahira.