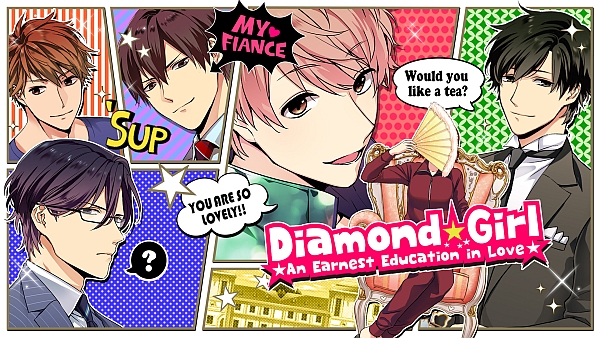 So out of extreme boredom due to lack of any otome games I want to play (and because I dropped Eden like a ton of bricks) I decided to browse the English Switch shop and purchased Diamond Girl. I remember seeing the advertising about the mobage 5 years ago but I didn’t wanna do the whole “read 5 chapters a day” thing so I forgot about it until now. Looks like they’ve ported the entire game and routes without any waiting to the switch for $20 in 3 languages – except Japanese. That’s right there is NO Japanese edition of this game! ( ﾟдﾟ) Not only that but the mobile version has ended service 5 years ago too lol. The story is about our heroine Charlotte (default name apparently in the English version) who is some office lady but finds out she’s actually some hidden child of a rich dude. Now she has to become some ojousama and marry into an arranged marriage. She’s sent to live with 4 ikemans, one of which is her personal butler, in a luxurious mansion and is to train how to be a proper ojousama until it’s time to marry her fiance. Please note as this is a mobile game port, this game is unvoiced.