I’ve been buying Taiko no Tatsujin games pretty much with every release since Donder Quest on the Vita and I can definitely say this is one of the weaker ones of the bunch.

It works the same way as all the previous taikos where you play a song, and eventually it unlocks more songs. Unfortunately this is missing features I really enjoyed on the previous versions which are:

That said the game does add some new features – none of which I found to be that interesting? The first one is DonKatsu Fight:

Like it’s kinda fun at first but then it gets really boring? Also when you play against another person in the same room as you, it gets really awkward when you hear 2 sets of drum noises and can really throw you off if you don’t have them both off.  The next feature that this game adds are the party games.

I honestly still to this day can’t understand this feature. None of the games make ANY sense to me and the timing is always off. I have no idea how the PC does it but I played with my husband and we pretty much lost consistently to the computer. I only ever won 1 or 2 games against the PC because they were that unintuitive. So rather than tons of fun mini games, they just ended up feeling like an unnecessary chore I never went back to. 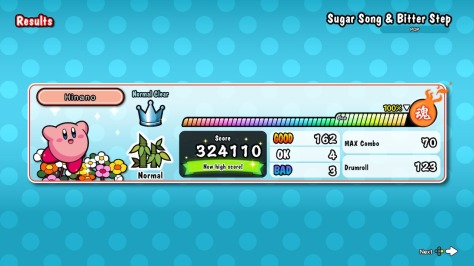 Now the one absolutely amazing feature of this game is the ability  to just straight up pick different characters to play as. It’s not just for looks either – each  character gives you buffs or nerfs. So for example Kirby helps you get more goods but the one I found myself consistently using were the 2 drum sticks: they basically make all your dons and ka’s the same. That means you can press the same button regardless of color. It’s amazing how much this makes the game challenge trivial. In exchange though, they have made all the songs insanely hard that in the past I was able to clear most hards/some oni now I struggle even with normal mode songs. 😫

The other down side is there’s very few songs and a lot of them are DLC only  – and/or repeats of the same songs from the PS4/PS Vita versions. The biggest tragedy is they basically don’t have any of my favorite vocaloid songs anymore lol. Anyway after playing this with my husband for a bit I honestly kinda got bored and stopped. The lack of costume collection (you can unlock characters but MEH), lack of any decent songs I like and the buttload of insanely pointless features/mini games just make  this a huge disappointment for me. Also! One of the features of the game is supposed to be the joystick mode where you use the joysticks as drums but as you can guess – it’s as accurate as a drunk monkey and you’re honestly better off just using buttons (in addition to saving yourself from massive muscle aches later.)

So overall if you’re looking for a good Taiko game, I’d say try the Vita or PS4 versions because I found them a lot more enjoyable. Fortunately, I bought this on a massive Christmas sale so it wasn’t a huge disaster 😇