I’ve taken a break from an MMO to play an RPG har har and so I’m going through my STEAM backlog which consists of mostly single player Final Fantasy games I bought on sale a while back. I actually began this game back in November of last year but FF14 updates kept me busy and I ended up dropping the game…until now! Unfortunately because of this I completely forgot what the hell actually happened in the story and I pretty much just stumbled my way through the rest of the game on EZ mode by increasing my stats/gil to max just to see the rest of the scenario. 😂

Princess Asche marries her husband for some political uniting reason, but it’s okay cause they’re in wuv ☺. But then he gets killed, and Rabadabanastre gets taken over by imperials and Asche goes into hiding while news spreads that both the king and queen are dead and now there’s chaos everywhere. Meanwhile this rando stereotypical FF hero type guy named Vaan is one of the random kids in the city with his bff Pennelo who is mad at everyone cause his brother also then got killed in a raid to try and save this other king or something. Anyway everyone’s mad at the imperials leader Vaayne (too many similar names I can’t keep up 😔) who has some spirit oracle thing controlling him in exchange for powers, because what else would bad guys want right? (My Summary is half assed and you should probably not take it to heart xD)

So anyway this game isn’t your standard hero saves princess (or princess saves the world) type of game at all. So coming after the usual Final Fantasy mindset I was really confused especially after dropping the game for 5 months before picking it up again. 😂 So honestly for a long time I sat there going “Who are you again” and “Why are they fighting again” but by the end I think I finally rememebered everything but at that point the only thing I cared about was Vieras and my Balthier x Fran OTP. Yea that’s right I cared more about “supposed side characters” than the “supposed main character” Vaan and his childhood friend (who obviously has a crush on him) Pennelo.

But anyway after I defeated Roid Rage Aniue these two basically saved Rabanasty from being blown up by a tumbling imperial ship and then I don’t even get a little cut scene of them in the ending credits. HIGHWAY ROBBERY I TELL YOU! Instead they show us Penello who literally doesn’t matter and Vaan who is like a placeholder main hero, when the entire story is about Princess Waifu Asche 😂. 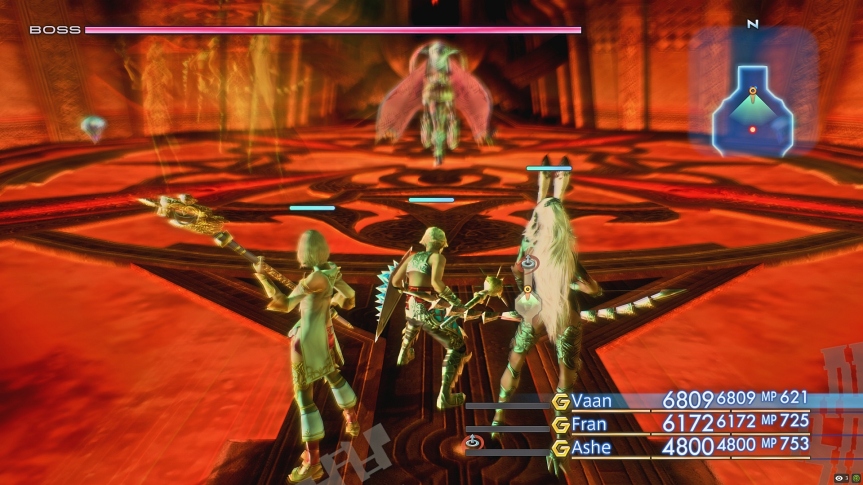 Since I began the game with Vaan, I had made him my tank so even when I just wanted to use Balthier instead of him, Balthier would just get instantly owned as a DPS so in the end I just finished off the game with this party of 3. The boss battles gave me a bit of nostalgia to the Ivalice raids from FF14 (which were based on this game + FF Tactics) and hearing the music again was really nice.

The other cool feature this game had was something called Gambits. The most recent update released in April allowed you to have more gambits and reset your job so since I picked MCH back when I first began I was glad to reset to Knight instead. Even though I was steamrolling enemies at the start, by the end stuff really did hurt and I actually needed Asche as a healer (though she kept whacking things with her sword too lmao). But anyway the gambits allow you to sort of set “AI features” for your team so for example “if someone in the party has hp less than 50% Asche will cast cure”. So this was really helpful when you didn’t want to sit there constantly switching between characters to have them do things like healing or esunaing. The other thing is unlike FF10 this wasn’t really turn based so the characters were pretty much whacking enemies in real time and I don’t know if it’s just the jobs I picked, but other than healing/buffing skills I found myself not really using any kind of special skills.

As seen in the image above, the graphics in the CG scenes were far better than their in game counterparts lol. It made certain characters almost completely unrecognizable 😂. I realize the graphics had a brick wall they hit at the time but damn some of those textures could really have used some smoothing lol.

Since I’ve been maining a Viera in FFXIV, the Viera village was a pleasure for me. I loved seeing all the different Vieras and seeing them talk about traditions vs becoming free. In the credits there was even a really cute picture of viera girls 🥺

So overall I guess the game was okay? I probably shouldn’t have taken a 5 month break and completely forgotten the story to truly enjoy it but it wasn’t too bad. I just wish it didn’t put the supposed main hero into basically the background to be the annoying guy that everyone rolls their eyes at lol. I also wish things like side quests/quest log was a little more obvious. I flew right through the MSQ but I’m sure there was some nice Viera side quests I missed out on because you couldn’t really tell NPCs apart – on whether or not they had a quest for you. It’s obviously a problem with older FF games but I got tired real fast of having to click like 20 NPCs to figure out if they had a quest or were the correct NPC for one of the story quests (looking at you idiotic chops quest 😒).

For anyone who missed my broadcast (ayy I’m broadcasting again since I’m on my PC) you can check out my highlights over at my Twitch channel. Now on to the FF13 trilogy! 😎

And before I forget: