This isn’t a complete review since I only played the routes that weren’t in the PC version. Please read my PC review first before reading this, thanks! So since the original PC version they’ve added blinking eyes on the characters, made Kyoko look less like a man and added extra scenes for Sawato & Chizuru.

Tsutsumi Chizuru – So yea I was wondering why in the PC version Chizuru appeared in like 2 scenes, even had 1 CG, but then we never saw him again! Chizuru is in the drama club but he keeps running away and skipping rehearsals. The club president gets annoyed at him and asks if Akari can convince him to come to practice. When Akari talks to him, he says he’ll agree to go to practice if she joins the club and comes to watch him act. Sawato isn’t so pleased that his precious public relations club member is doing other activities but has no choice 😆 One day Akari goes shopping with Chizuru and he starts flipping out and almost strips naked XD. Anyway Akari overhears Chizuru talking to sensei who tells him he should go get the surgery before it’s too late. Akari gets worried thinking that Chizuru’s life is in danger and she asks him if he has some kind of illness. He tells her that it’s true that he has some illness that requires surgery, but he’s been trying to hide it. He tells her he doesn’t want to have surgery but doesn’t tell her why, and asks her not to tell anyone else especially Kyoka, the club president. One day during rehearsal Chizuru passes out and Akari carries him to the nurse’s office. She uses her pendant to see into his past and it’s Kyoka and Chizuru as kids practicing acting. He tells her that he had a cousin in the past who died from the same disease he has now and that even if he has surgery, it may not heal his disease. (Sigh Japan and their magical unknown diseases.) 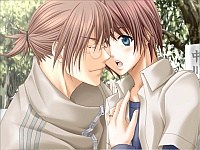 The surgery is risky and he could die from it too which is why he’s afraid of getting surgery done. Chizuru’s dream is to become an actor who can be better than Kyoka and he doesn’t want to give up until they’re able to do their performance. On Christmas they go to get some stuff for the club and Chizuru claims that they’re on a date – even though Akari keeps thinking he has a crush on Kyoka. When Akari tells him that he just laughs it off saying that back then and even now he sees Kyoka as his acting rival. He tells her the truth that she saw in his “mind” when she used her pendant and Akari says that she wants him to get the surgery. She tells him that she always wants to continue seeing him act which comes out as an indirect confession to him 😆 He says he’ll do his best and runs off happily ＼( ^o^)／ . The next day he asks to meet up with Akari in the park where he hugs her telling her he will get the surgery done and that he always wants her to watch his acting. In the epilogue I guess he made it through the surgery and Akari visiting her mom’s grave with him & Fumi. Chizuru tells her that his 18th birthday just passed and he gives her back a hankerchief he bought for her to replace the one that was all bloody. Inside the hankerchief is a ring to make sure he has her before “someone else takes her” |萌|･´∀`･)ﾊｧﾊｧ 萌えぇぇ↑ He says at her mom’s grave “I’ll make her happy” and kisses her XD. He tells her the words he couldn’t say last year was that he loves her and wants her to be with him forever. Fumi comes back raging at what they’re doing in front of the mom’s grave 😆 Chizuru was actually really cute except when he started sounding like an okama ( ´_ゝ`). I also noticed a massive change in the quality of the artwork in his CGs compared to the original ones. Not sure if they got a different artist, or if the artist just leveled up since the original game lol. I kinda wish he had more CGs with his hair down though..he looked a lot hotter (*´Д｀)/ヽァ/ヽァ.

Sawato Yuzuru – Ah well this is the route I’ve been looking forward ever since the PC version and Panic Palette. In this game Sawato is only a 2nd year so he’s not the president of the public relations committee just yet. It’s strange I expected so many more scenes with him since he had a bunch of them in PP, but there really wasn’t as many so I guess I was kinda disappointed (´･ω･`；).  When his mom calls him on the phone while he and Akari are out having ice cream, he hangs up. He tells Akari that his mother and father have been divorced and his mother has left the house back when he was younger. He asks her to come to the public relations club room early the next morning and suddenly leaves. One day after school she comes back from doing her patrolling and finds that Sawato looks really under the weather. Akari tells him to go to the nurse’s office but he says he hates going there and that his meds will kick in eventually. He says it’s just gastritis pain but he asks if Akari can just be in the room with him. He falls asleep and mumbles “Don’t go….wait…mother”. Sawato has been classmates with Hanamura since elementary school. He also says that he had a sister when he was 4 but she died 2 years later and his parents got into a lot of arguments about it so they end up divorcing. He ended up being taken by his father….who liked to crossdress his son 😆 The moment he put on the tunic that his dad bought for him…it lit a crossdressing fire under his ass and so that’s why from then on Sawato became a crossdresser lol. Sadly because of this most of his classmates ignored him and he lost friends. After school he went alone to sit by the riverbank but the only person who followed him was Hanamura and offered him some candy. From then on they became  friends I guess. 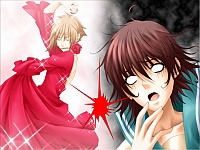 A couple days later Akari is able to see into Sawato’s heart with the necklace. He says that this is a dream and that he wishes that he was born a cute girl like Akari so his mother wouldn’t have abandoned him. After the dream sequence ends, Akari cries and tells Sawato that if he’s lonely that he should just say so..and even if he acts like it’s ok she’s not ok with it. Sawato hugs her and thanks her for being there for him. On the 23rd, Sawato tells Akari that his mother wants to get back together with his father. Before this, one day his mom had called Sawato asking to meet him. He didn’t know what to do because 1. he was a xdresser now and 2. he felt like he’d betray his father so he refused to ever see her. From then he never gave her an answer and then before he knew it he found out his parents plan to re-conciliate.  Thanks to Akari he realized that he should just accept this and not be all angry about it. On Christmas, Sawato asks her to help him buy a present for his parents getting back together, and I thought he’d come wearing something normal but he’s in some kind of gothic dress.  They go shopping for clothes and Sawato ends up trying on a Flamenco dress ﾌﾟｯ(※థэథ)∵.*.∵Akari picks out an antique lamp for his parents and then Sawato decides to buy it. She wonders why he decided so fast and he says “it’s a gift chosen by my girlfriend”. He then tells her that he’s bringing her to meet his parents in an hour. Akari starts freaking out about what just happened and he calls her by her first name (instead of Nishi-kun like always) and asks her not to be so angry about it…or else….he comes closer to her and kisses her. BUT WE GOT NO CG. OMG NOOOOOOOO then the game ends. (ﾉಥ益ಥ）ﾉ 彡┻━┻Y U DO DIS! Sigh. I was all |萌|･´∀`･)ﾊｧﾊｧ 萌えぇぇ↑  for like no reason! TAT

Well I originally intended to do that seitokai route I didn’t do in the PC game but screw it. After that Sawato end, I have too much rage in me right now sigh. Talk about trolling the player at the end (ﾉಥ益ಥ）ﾉ 彡┻━┻ Also I was reminded about how much I hated that there were all these Fumi/Nene scenes I didn’t give a crap about since I didn’t play Cherry Blossom. Like yea hi sorry I don’t care about you Nene because I don’t play the BL game you were in ( ´_ゝ`). Additionally despite this being a PS2 port, there was no auto skip. You had to press and hold R1 manually to skip (which was slow as molasses) and my finger really hurt after a while skipping through the “general” route. Meh I guess Panic Palette really brought “life” to some of the characters here but as expected, Little Aid QUALITY shines brightly! My final words I guess if you play little aid, play the PS2 version so you don’t have to play it “twice” but if you played the PC version only the 2 guys above are worth playing for since there’s no new content otherwise. Hell even the Cgs are the same. Some games will do image refining during ports but nope – everything is the same. Anyway now that I’m done with the LA/PP world I can move on to other games (´･ω･`；).