Similarly to the spring version, the heroine is…YOU. No. The heroine is Yohisa Tsukiko and it feels really weird because all the guys from the previous games still go to her school but they’re basically background characters. In addition, there have been cameo appearances made by characters who will be in the autumn and winter games 😆 This time the story takes place from June – August, and the main focus is Tsukiko is now a member of the archery club where she gets to snag the top 3 arrow shooting bishies. I’ve been requested to tell what signs the guys are so….Azusa is Sagittarrius, Ryunosuke is Scorpio (like me!), and Homare is Taurus. The thing is – based on their birthdates though, Homare should be Gemini, Ryunosuke should be Sagittarius. Azusa is ok though he just makes the cut off date. I’m not really sure what astrology calendar the makers of this game are following to be honest lol.

Unlike in Spring, the focus is mainly on the archery club and the archery competition. While they do have one scene where Tsukiko is almost mauled by all the classmates of the guys for being the “school goddess” (lol I can see who this is targetting) the focus isn’t just on her and the guys. While we do have the “two guys who don’t get along” most of the story is about everyone practicing to get better for the archery best in the country competition. In addition, we have a peanut gallery in this game – the other 3 members of the archery club which all have pretty decent seiyuus. They definitely made the game a lot more fun and helped take focus away from just having all the guys fighting over our faceless heroine ^^;.

Kinose Azusa – Fukuyama Jun time! The best part is in this role he sounded more like Keita from Inukami than Lelouch from Code Geass. Azusa is a freshman who joins the archery club – however it’s not the first time that Tsukiko had met him. Apparently when she was once at archery practice, he came by from the middle school and told her that her arrow has a certain spark to it. This helped her become better at archery and so she was really happy that she was able to meet the person who inspired her once more.The entire time Azusa basically spends hitting on her, similarly to Yoh in the first game, and pissing off the assistant captain Miyaji. Simiarly to Suzuya, captain Kanekubo ends up telling them “now now calm down” every time lol. 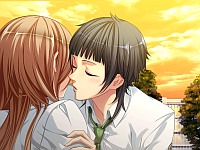 Azusa’s name also resembles archery and so a lot of people say he’s born with a talent for it and is an archery genius. At first Azusa basically acts like a snotty brat about it, but then he becomes all emo and depressed thinking that he’s not good enough in comparison to Tsukiko. I dunno this whole plot line was really…odd. Like they needed some excuse for him to get emo. Anyway apparently Tsukiko gave him some speech about being able to have “multiple talents” and so instantly his emoness disappeared and after they won the archery competition he asked her out. Thankfully she didn’t do that whole “I don’t know my feelings” bullshit and basically accepted him. Unfortunately like with the first game, we got rickrolled with the kiss scene. *kisses my monitor* 😕 The “true end” was that a year later Azusa wants to make out with her some more and that he’ll try to catch up to her in college or something. Wow surprise! No wedding end! In his seiyuu talk, FukuJun said he’s a lot like Azusa and always feels “confident” in himself. He also said his favorite season is the fall because the summer is too hot and doing laundry is really annoying XD. 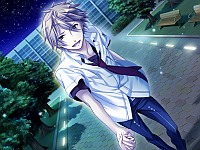 Miyaji Ryunosuke – Ryunosuke is the assistant captain of the archery team. He’s usually pretty strict with everyone and at first doesn’t get along with Azusa that well. However, he’s a scorpio and underneath that hard exterior is a cute adorable and sexy manbeast. While I wasn’t a fan of his seiyuu since he voiced mostly in anime that I didn’t watch/like – the character was absolutely 萌え。 First of all Miyaji loves sweets. His daily lunch consists of fruit cakes and parfaits lol. (Then again it’s better than Azusa’s nasty freezedried space food 😕 ) He also tends to blush a lot and get all embarrassed like Kanata, but at least he’s not a loud and obnoxious oranyan chara. After the archery competition a girl asks Tsukiko to give Ryunosuke a love letter. When Tsukiko does he’s really surprised but then when he finds out that it’s not from her, he refuses and tells her to “give it back”.

A couple days later during practice his hair is getting in his face because he’s not taken the time to cut it. Tsukiko offers to pin his hair out of the way using a hair pin…and while doing so her face gets so close to him…that he just kisses her without thinking xDDD She’s like 😯 and basically realizes then that she likes him. Ryunosuke on the other hand ends up avoiding her the next few days and when she tries to talk to him about it telling him how she didn’t mind him doing it…he tells her to forget it. Azusa is sick of seeing these two staggering like 2 idiotic lovebirds that he threatens Ryunosuke with asking Tsukiko out over the phone. The next day Ryunosuke grabs her hand and pulls her to the rooftop confessing his feelings. (LOL I love how jealousy moves him xD) Tsukiko tells him that she’s not going out with Azusa and that it’s “about time damnit” xD; Ryunosuke’s like “holy shit I’m so happy, let’s re-do our first kiss for realz yo” *kisses my monitor* The epilogue is them at like age 21 (?) at his parents’ house and she agrees to marry him after they both graduate college. In his seiyuu talk he mentioned how in the summer it gets so hot, and his poor kitty tries to find the coolest spot to sleep in xP

Kanakubo Homare – うおおおお誉先輩アイラブユーゥうううううう！！！！！！！！！！ハァハァ…..wwww ok ok this was by farrr my favorite route. He’s also voiced by Souichiro Houshi which when hearing makes my brain melt into a puddle of warm pink jelly. Homare is the captain of the archery team and a 3rd year so he’s older than everyone.  He specializes in astrology so he often makes suggestions and gives advice regarding people’s personalities based on their star signs. He’s sweet and gentle and pretty much makes it obvious on multiple occasions that he likes Tsukiko. While he may be gentle to her though, if anyone dares to get on his bad side (or dare to touch Tsukiko when she becomes his g/f) there’s rage to be unleashed. 😆 Unfortunately Tsukiko is dumb as a brick so she doesn’t get it at all ^^;; The year before, they lost the championship because Homare got really nervous under pressure. This was a big issue for him, but because Tsukiko gave him words of encouragement he kept going on as the archery team captain. At one point Tsukiko overhears him talking on the phone to a girl, and she begins to think it’s his girlfriend.

Turns out it’s actually his younger sister so Tsukiko was avoiding him for no reason lol. He later tells her that after the competition, he will confess to the “girl he likes”. In addition he writes something on Tsukiko’s hand (for good luck) but asks her not to look at it until after the competition (how the hell do you not look at your hand for 24 hours?) She does the same to him as well because the good luck thing is “writing on the hand of the person you like” hehe. After they win the competition of course Homare confesses to her and she reads her hand that said “to my dear Tsukiko-san”. (大好きな） She’s so happy of course she tells him she likes him too and he hugs her and its so cute I almost exploded xDD!!!!!! Omg all of his scenes are soo freaking adorable (´Д`*) After he graduates he asks her to call him “Homare” instead of “captain” since Ryunosuke will be the new captain of the club now. He also asks her to kiss him to make a promise that he will be with her together forever. Needless to say in the epilogue they are now looking at churches to decide where they will be getting married 😉 Also I listened to the bonus seiyuu talk and Souichiro-san said that he’s very very jealous of Homare and the entire concept of falling in love with your only female club member 😆 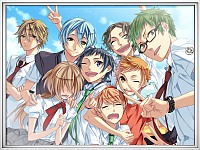 Indecisive Tsukiko End – This is basically if you went through the entire game and instead of focusing on the choices of  1 guy, instead you’d pick the “flag” for every guy. Eventually this would lead to not getting with any of the guys, losing the female archery competition sector, and also never letting Azusa get out of his slump – further losing the male competition sector as well. However, after the credits roll Tsukiko is all sad and shit that they lost, and so the baka trio come over to make her feel better. Inukai gives a speech about she’s just sad that summer’s over and they talk about all the memorable stuff that happened in the game. Then they all start crying, me along with them, because this truly meant that now the game has ended…and I liked it so much 😦  In addition for doing this route you get a bonus CG of everyone in the archery club – including Haruki sensei (red shirt) who you’ll be able to get with in the autumn game 😈

Ugh so needless to say, if having 2 of my favorite seiyuus in this game wasn’t enough, the guys are absolutely adorable. All 3 of them have great points and the addition of the 3 stooges side characters made things even more fun. At first the whole archery club concept kinda bored me since it’s not something I could relate to (all I ever did was a few archery things at camp lol) but after we got past the boring parts, the characters interactions were the best. The lunchtime food, the “fake” confession to Homare, the cleaning race, the clothes shopping and of course watching the stars (as common with all these games.) 😀 In addition at least in this game Tsukiko wasn’t indecisive about her feelings after the guys confessed. That really pissed me off in the first game, I was like “bitch Ima Nice Boat you if you don’t make up your mind.”  Anyway everything was so wonderful, save for the stupid kissing CGs, but I have a feeling we’re destined with faceless Tsukiko and “kiss my monitor” for the other 2 games as well T_T; Oh well, I hope I can get to play Autumn and Winter games and then I guess I can decide which one is my favorite. Right now Summer is definitely holding the #1 spot there – guess we’ll see what happens in the fall!