So after a 2 months of playing on and off I finally finished Nursery rhyme. The problem is this game was Lump of Sugar’s first release and sadly the only thing going for it is a catchy theme song and really cute and well drawn CGs. The game has like no story and everything is stereotypical as possible. I mean there are some stereotypical stuff that I like, but it felt as if the main male lead, Shizuma was some kind of asexual starfish that had no reactions or feelings towards anyone in the game – that is until the last 4 arcs.

One of the worst things is say you’re going for girl a. You’ll also have to first go through multiple arcs of girls b-d before you actually get on the path of girl a. It starts to get really annoying when you’re like “geez why do I have to go through another stupid story about xx or yy.” In addition the stories are generic, the characters are generic and everything has been such a drag that a game which should have only taken me a week has taken me 2 months. 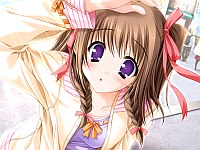 A brief introduction first. Asakura Shizuma moves back to his hometown and into the house of his childhood friend and her twin sister. There also live 2 other females who are I guess renting rooms or something. One is a loli but is a genious loli who goes to the same school as the twins. The other one is a college student. I don’t know where the father is, I’m under the impression that he’s dead, and I have no idea how they pay for this house since the mom sits at home all day going “ara ara!” But hey it’s eroge, they never have any concrete explanation for any of the settings.

Shizuma also has a best friend since he was a kid named Phil, who’s your typical “main lead’s best friend douchebag” character that all the other females hate. Other important thing to note about this game is it has furries and elves. Apparently Shizuma is half elf too but he looks like a human, I guess he didn’t get the ear gene. I guess magical creatures are a normal part of this town because they all go to school with Shizuma and you can see them in backgrounds of a lot of the event CGs. I never understood why, and I don’t recall but I think Shizuma’s parents are working abroad which is why he was thrown back into someone else’s house.

Tomoe Makina – Makina is the first girl you meet in the game so I just did her route first. It wasn’t until like the very VERY end where she wins some sports day race and then confesses to Shizuma and he accepts it. Everyone notes that he’s as thick as a log and doesn’t realize her feelings. Well honestly I didn’t realize her feelings either because half the time she’s this “genki” girl trying to do well in her sports club. In addition she’s really dumb, has bad grades and has the worst sleeping habits ever – one of the scenes is Shizuma walking in on her sitting on the toilet with toilet paper all over herself =_=; Only a few times there was “potential” for her having feelings for him so well frankly I don’t blame Shizuma in the least bit.

Despite this being an eroge, the eroscene took place in her bedroom and not in some random area. It was also all like “this is my first time this is all romantic” kind of thing. I didn’t skip through it because I didn’t realize until I did Yukina’s story you had to turn off automode off for skip to work ^^; The “thick of the plot” was that Makina overworked herself in practice and was unable to move for a few months. Once she got better though it didn’t really get any less boring afterwards. The event CGs were beautifully done but that could not stop me from snoring and playing on and off. Sadly for Makina this was the first story I did so of course I had to go through the bulk of the boring storyline during her route.

Tomoe Yukina – You know at first I really liked Yukina since she seemed the more calm of the sisters and her voice didn’t pierce my ears everytime she talked. Unfortunately she was the more dysfunctional twin. While on the outside she seems like the caring and shikkari oneesan, in actuality she’s a yandere bitch who’s just holding it all in because of pressures from Japanese society. You can also tell she’s yandere because she freaking loves scary gore movies 😆 She has a long time crush on Teeta’s older brother, so when she finds out that he has a fiance she is completely crushed. She is so crushed that her yandere personality begins to come out, and then she begins to use Shizuma as a replacement because he is similar to the brother.

Due to this she acts like a bitch to everyone who tries to intervene because they feel sorry for the poor guy. She slaps Makina and makes her cry and tells Teeta she doesn’t care if she’s being a horrible bitch. Teeta of course slaps her back. It’s sad too seeing her give Shizuma the run around, but since she is his childhood friend he just cannot hate her for it. (What a guy! ;-;) Their ero scene wasn’t as romantic as Makina’s, cause they did it next to a tree in the freaking park. Also it was done from behind which to me is like the most degrading way for any kind of eroscene to happen. I had to find a different guide to be able to finish her route properly otherwise it only cut off at her and Shizuma dating. In the true end, there was a 2nd eroscene (which I also skipped through but at least it was in Shizuma’s room this time) and she ended up catching the boquet at Rael’s wedding.

Tita Flawless Brandt – This felt like the longest arc of all three of these. To be honest I found Tita to be an annoying bitch becaus well she’s the game’s tsundere ojousama (because she’s the daughter of a rich dude.) She didn’t give me the best first impression when she slapped the shit out of Shizuma for accidentally catching her changing. As expected she spends the first half of the game being mostly tsun and then the latter of the game being dere. I don’t know if she’s supposed to be some kind of foreigner or something but apparently she’s never been to a Japanese matsuri or eaten cotton candy. (Come on everywhere in the world has fucking cotton candy 😯 ) The worst part was how like long it took for these two to get together. It was obvious for a while that Shizuma liked her but it seemd like nothing happened until one day they were randomly alone in the classroom and he asked her to call him by his first name.

In addition the drama of her story was that she was running for student body president against vocaloid Kaito who caused some other sort of drama around her. By this point it had gone on for so long that I could hardly pay attention. I just let the game auto talk while I browsed websites and stuff. I just couldn’t hold my interest because I couldn’t care less about student council politics. It was also quite stupid at the end when Tita came over Shizuma’s place and everyone conveniently “Went shopping” so the 2 of them could do it. Also for some reason in her route there was no option of “in or out” lol. I dunno whatever thanks to the length of this route I decided to pretty much quit the game from here.

The other 2 characters are the furry loli Kururu and the elf girl Rin.

Honestly if the stories in this game weren’t so long and boring I would have been interested to see the deal with them (especially since Shizuma is half elf) but based on my 3 runs I can tell that there will be nothing interesting about any of these girls. While the art is nice in some CGs, in others it looks completely off, (like I drew it or something 😆 ) It also doesn’t help that Shizuma’s as thick as a brick until the last 10% of each female’s story. It’s like “damn you stupid man can’t you tell she likes you geezus.” I guess in the end it seems Makina is the most fun and likeable character of the entire game so if you do plan to bother playing this, I’d recommend just playing her route and skipping the rest.